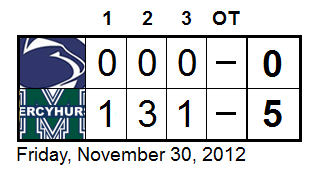 PSU simply isn't at that point in the development curve yet, as the fourth-ranked Lakers showed their pedigree in a suffocating win Friday night that saw an 60-10 shot count in favor of the hosts.

There's really no point in rehashing much detail. The game was played almost entirely in Penn State's zone, and other than maybe one Shannon Yoxheimer special - a quick-release shot off of a rare offensive faceoff won to her - the Nittany Lions didn't pose much of a threat to Amanda Makela in the Mercyhurst cage. On the other end, Shelby Bram's goal to finish a nice feed from Christine Bestland in front set the match's tone just one minute after puck drop. Bestland, the third leading scorer in the country, found Stephanie DeSutter charging the back post on a power play in the second period, then scored one herself on the advantage with less than one tick remaining in the frame. Kelsey Welch also scored in the second, while a Vaila Higson blast closed the game's scoring early in the third.

Nicole Paniccia and Celine Whitlinger shared the abuse in net, with the California freshman taking over for the final period and making 26 saves after Paniccia made 29 in the first 40 minutes. The Lakers, on the other hand, extended a shutout streak that now sits at 294:35 and dates back to November 2nd.

As the stats indicate, there wasn't a lot of beauty to take away from a Nittany Lions perspective. Still, there's something about this young team that keeps me engaged and excited, on a level much greater than I planned at the outset of the season. In fact, I can't wait to get back to the rink on Saturday and do it all over again.

Maybe it's the way Tess Weaver hustled down the ice in the first period in an attempt to beat out an icing call. She didn't on that occasion, but the entire bench still took notice of her effort and shouted encouragement. Maybe it's the undoubtedly purple hue of Paige Jahnke's skin after the blueliner blocked what seemed like 300 shot attempts (we didn't get official stats on blocks, so let's go with 300). Maybe its the relentless defending of forwards like Micayla Catanzariti, Birdie Shaw and Jill Holdcroft. Maybe it's the way Jordin Pardoski was still knocking people over with 11 seconds remaining in a long-decided game (yes, body checking is still illegal in women's hockey - not the point). Maybe it's the way Josh Brandwene thanked me for making the trip, even though I like watching this team and it's hardly a chore to do so. I don't know.

What I do know: I'm watching a program with the type of culture that, a couple recruiting classes down the line, could very easily be the difference in beating a program like Mercyhurst.