We've Been Here Before

When Penn State plays Neumann at Citizens Bank Park on January 4th, it won't be Penn State's first time playing a hockey game outside. Actually, it will be a culmination of a more than 100-year long journey notable for its frequent connection with Mother Nature.

Outdoor ice skating at the Duck Pond (just off campus, near the intersection of College Avenue and Porter Road) was a popular activity in Centre County during the first half of the 20th century. In response PSU (well, PSC at the time) made numerous failed attempts at bringing it and the informal hockey games that sprung up to campus via outdoor rinks during the athletic director tenures of Pop Golden (1903-1912) and Hugo Bezdek (1918-1936).

The story, as it relates to hockey, largely picks up during Penn State's original varsity era from 1939-1947 - in fact the concept of outdoor hockey, now seen as a nostalgia-inspired spectacle, was one of the reasons for that program's failure. Here was the most frequently used (or at least attempted) home ice in those days: 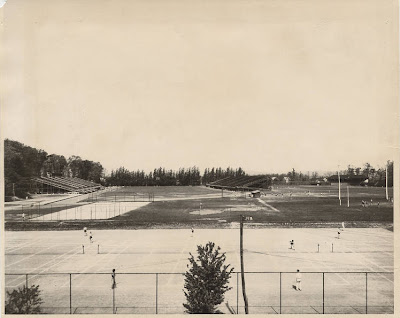 You'll stretch your imagination trying to picture it, but this picture was taken from West Halls, across Curtin Road. The occasionally-flooded tennis courts are where Kern and the large area in front of Chambers are today. Later attempts at a rink were made in the background of the picture, behind New Beaver Field's east stands (the set on the right). As you might expect, this arrangement at the mercy of the weather resulted in exactly one verified on-campus home game during that entire varsity run, a 6-1 loss to the Hershey Jr. Bears on January 27, 1940, during which legendary goalie Larry Lightbody made 27 saves.


While a majority of games were played indoors, most notably at what's now known as Hersheypark Arena, Penn State was hardly unique among colleges who played on outdoor rinks, with game cancellations a regular occurrence for away games as well. One example is Cornell, which played on Beebe Lake when PSU visited on January 5, 1944 and lost 8-1. For that one completed game, there were at least three others scheduled in Ithaca - on February 15, 1941, February 26, 1943 and February 1, 1947 (yes, PSU played in 1947, contrary to what you'll see just about anywhere else) - cancelled due to mild weather. In fact, the inconsistency of the outdoor ice caused Cornell to drop their program altogether in 1948. Unfortunately, the similarity to PSU ends there. CU built Lynah Rink, where they still play today, and reinstated hockey in 1957.

If one's willing to accept a slightly more flexible definition of "outside," there are more recent instances. In 1995 and 1997, the Icers played games at the Geneva Recreation Complex, home of the NCAA Division III Hobart College Statesmen (incidentally, Hobart now shares an ECAC West conference affiliation with Neumann). While the facility is now fully enclosed, prior to 2007 it was not.


I was unable to locate a picture of the GRC in its pre-2007 state, but see that glass behind the far goal and down the far side? Imagine that's not there, and you get the idea. All of the rink's 500 seats are located down the previously-open side (with the benches on the near side), so I imagine it was a blast to watch a game there in the middle of a Finger Lakes region winter. Or to try and keep freeloaders from entering through the open side.

The Icers had mixed success there, opening the 1997-1998 ACHA championship season with a 6-2 win, but losing 6-5 in overtime three seasons prior after entering the third period with a 5-2 lead and surrendering the tying goal with 19 seconds left. Joe Battista, never one to mince words early in his coaching career, wasn't pleased.


"We just pissed away a golden opportunity, we made some real bonehead plays. We definitely played well enough to win this game."

West Virginia, a frequent Icers opponent through the years (although at the Ice Pavilion the vast majority of the time), also formerly played in an open rink. While the Morgantown Ice Arena was constructed in 1979, it was not fully enclosed until 1997. 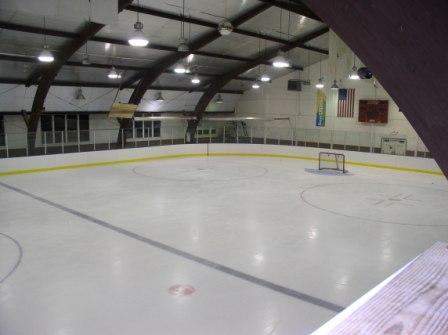 As with Hobart, the internet failed to deliver the ideal picture. But it's pretty easy to tell where the original pavilion-style roof ends and the fill-ins begin. Former WVU coach Brian Bronk felt that his team had a home ice advantage prior to enclosure.


"Our rink is so unique. The elements really play into our favor. It [is] a big advantage."

Advantage or not, the Icers didn't seem to notice, winning 10-0 on Valentine's Day 1997 in their last pre-enclosure visit.

Those later pieces of Icers history bring us full circle in a sense, to the original Ice Pavilion, the rink that arrived several years too late to save the original varsity program. It was constructed in 1954 as a full-on outdoor rink, then had a roof added in 1959 and walls in 1962. PSU didn't have a formal hockey team during this time, but played in the (by then) indoor venue from the Icers' founding in 1971 until 1978 when it was converted to an indoor track and turf facility (it was demolished in 1999 to make way for the now-infamous Lasch Football Building).


The loss of The Pavilion to football and indoor track forced the Icers to play home games in Mechanicsburg and practice on flooded tennis courts (by that time, on the other side of campus) for two years until the present-day Ice Pavilion opened in 1981 - a situation that did not sit very well with those associated with the hockey program at the time. Undoubtedly, 13 days from today will mark a much happier foray into the elements.
Posted by Kyle Rossi at 1:30 AM