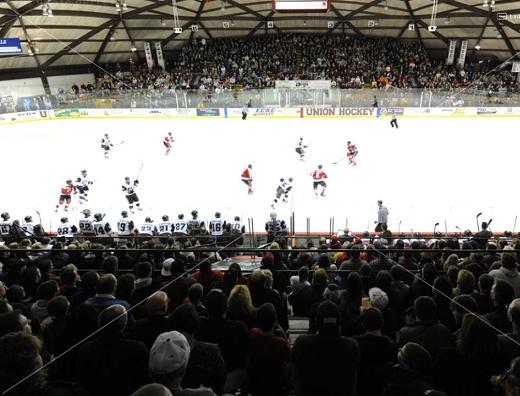 While it's not signed and official just yet, Ken Schott of the Schenectady Daily Gazette is reporting that a series between Penn State and Union is in the works for November 23 and 24 next season. The games are to be played at Messa Rink, the home ice of the Dutchmen.

Without a doubt, Union is a program in ascendancy. The former NCAA Division III school joined Division I in 1991 and spent more than 15 seasons toiling below or near .500. Former coach Nate Leaman's program turned the corner with a 21-12-6 mark in 2009-2010 and took another step last season by winning the ECAC regular season title and qualifying for its first NCAA Division I tournament. The Dutchmen lost in the opening round to eventual champion Minnesota-Duluth but still, point made. Leaman parlayed that success into a job at Providence in the offseason, but the team hasn't missed a beat this year under former assistant Rick Bennett at 9-3-5 so far and No. 10 in the polls. Also, a small senior class of four means that a large percentage of this year's team will face PSU in November (although one of the four is leading scorer Kelly Zajac, brother of New Jersey Devil Travis).

Of course, Guy Gadowsky and his staff already know Union rather well from their time at Princeton, one of UC's conference rivals.

Once the weekend set with Union becomes official, it will join an October 20th game against RIT at Rochester's Blue Cross Arena and an October 30th game at DIII Fredonia State on PSU's rapidly-filling fall schedule. Additionally, two games each at Michigan State and Wisconsin, four games against the U.S. National Team Development Program, and two games at the Robert Morris Hockey Showcase over the holidays (possibly including two of RMU, Miami and Ohio State) have been confirmed, but without firm dates.
Posted by Kyle Rossi at 11:59 PM