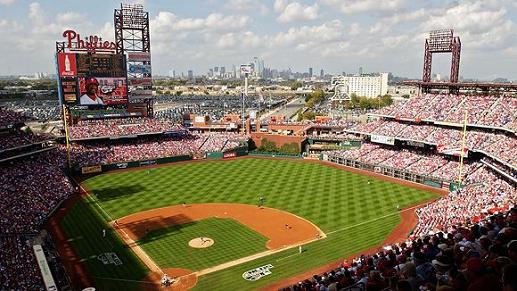 Following an "all-but-official" phase that lasted since July when an announcement was prematurely leaked, Penn State and NCAA Division III Neumann University have announced that the January 4th game between the schools will, in fact, be played at Philadelphia's Citizens Bank Park on the Winter Classic ice. Puck drop will be at 8 p.m., and tickets - which are general admission only - are available here (enter "PSU" as the promotion code). Here's the press release quote from Guy Gadowsky:


"Many of my fondest memories of growing up playing hockey come from playing outdoors. There is something really special about the feel of the air and the sound of the ice. The Penn State Hockey family is extremely grateful to Comcast-Spectacor President Peter Luukko for the opportunity to participate in this once-in-a-lifetime event. It will be an unforgettable experience for our entire team."

Speaking of Luukko, here's his statement:


"As Penn State becomes a Division I Hockey school, what better way to make a statement than to compete on the largest stage in the State of Pennsylvania when they face off against Neumann University at Citizens Bank Park. There are a tremendous number of Penn State alumni living in the Greater Philadelphia Region who are looking forward to this game. We are thrilled to host this game as part of a week-long celebration of hockey in Philadelphia. It will be great for the City and great for the school. We're really looking forward to welcoming Penn State Division I hockey to Philadelphia."

The game becomes the eighth outdoor game involving an NCAA hockey team played at a Major League Baseball stadium to be scheduled this season, although it will be the first to actually be played. From January 7 through 14, literally more than half of Hockey East will play at Fenway Park, a list that includes Vermont, Massachusetts, New Hampshire, Maine, Northeastern and Boston College. ECAC teams Union and Harvard, women's Hockey East squads Providence and Dartmouth and Division III's Babson and Norwich will also be joining them in Boston. On January 15th, Michigan and Ohio State will face off at Cleveland's Progressive Field.

Penn State's officially joining the parade is fantastic news for everyone involved, although one has to wonder why this confirmation was delayed for so long - severely damaging the potential for a well-marketed, well-attended event. The official awarding of the Winter Classic to Philadelphia, long assumed to be the hold-up, took place on September 26.

Just to give an example of a different timeline, the Cleveland outdoor game was official in early November (even after some apparent negotiation hang-ups that postponed a planned August announcement), over two months ahead of the game. While still-ACHA Penn State and DIII Neumann certainly don't have the pull of Michigan and Ohio State, there was still the potential for something more than the parents-and-girlfriends affair now likely just 27 days from now.

Nevertheless, I'm pumped for what's sure to be a unique event. Even after varsity status is official, it's not like we'll be in on an outdoor game every year. Incidentally, it will also be a fantastic measuring stick of a game against the current No. 15 team in DIII, which also still has five players from NU's 2009 national championship - including the Frozen Four MVP from that season. I'll be there, and hopefully you will be too.
Posted by Kyle Rossi at 5:30 PM