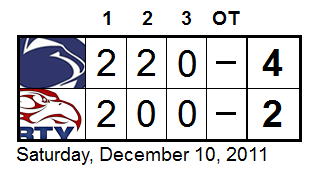 The 14-2-0 and No. 1 Icers closed the fall semester in style, by earning a split at Liberty via a 4-2 victory following Friday night's upset loss. IcersGuy of Black Shoe Diaries was apparently the only person on the internet to watch the game (admittedly, I was among the otherwise occupied), so he wins the right to have his unfiltered take presented here. I'll forgo normal TYT style rules due to the lengthy copy/paste.


Hoping to end a successful semester on a fitting positive note, the Icers looked to take the Saturday game against the Flames. In the normal goalie rotation, PJ Musico would get the start in net. Hoping to set the tone early, George Saad would give the Icers an early 1-0 lead, thanks to some strong forechecking from Eric Steinour. Liberty would tie the game a few minutes later, but Nate Jensen would get the lead back, just 14 seconds after Liberty's goal. Liberty would get a late powerplay goal to tie the game at 2-2 after one period of play. The Icers would finally start taking control of the game in the second period. Five minutes into the 2nd, Kirchhevel would set up Tommy Olczyk for an easy goal, giving the Icers the 3-2 lead. That would remain the score until Chris Cerutti found an open Paul Daley in front of the net, who put home an easy goal, giving the Icers the 2-goal lead. The Icers would carry that lead into the third period, and although no more goals would be scored, the Icers showed improvement in a number of deficient areas from the weekend. An energized power play almost extended the lead on a number of occasions, while the defensive turnovers and breakdowns were minimized and neutralized without allowing Liberty to take advantage. The 4-2 win gave the Icers a weekend split with Liberty, providing some positive momentum heading into 2012.

The Friday night game was easily the worst game the Icers have played this season, and that leaked into Saturday a bit. The biggest issue continues to be the turnovers in the "gray zone." These are usually lazy turnovers near the blue lines that allow the opponent to start an offensive rush while the Icers are moving in the opposite direction. Even if the opposing team doesn't capitalize (and teams like Delaware and Liberty did), the momentum shifts and the Icers are left scrambling. That was the difference between Friday's loss and the solid 2nd and 3rd periods of the Saturday game. Also, kudos to Collins, Saad, and the rotating third player on that line (usually Steinour, sometimes Cerutti or Morrone). That line continues to play consistently well in all areas of the game.

Two other areas that need some support are the power play and goaltending. Goaltending just needs some consistency at this point. Madrazo opened the year as seemingly the #1 goalie, and has only missed the past two weekends due to injury. (It sounds like he's ready to go, and the coaches merely gave him the weekend off to ensure a complete recovery.) PJ Musico has made a strong case to get some more starts, while Tim Carr is still trying to catch up. All three are talented, but I think they just need consistent starts - the continual rotation isn't helping their ability to get into a groove. As for the power play, it has been solid for most of the season, but the 0% success ratio this weekend makes me lean towards developing set power play units. Also, a healthy Taylor Holstrom and Bryce Johnson (who went out during Friday's game and did not play Saturday) can have a major impact on the power play, and the team as a whole.
Posted by Kyle Rossi at 2:00 PM