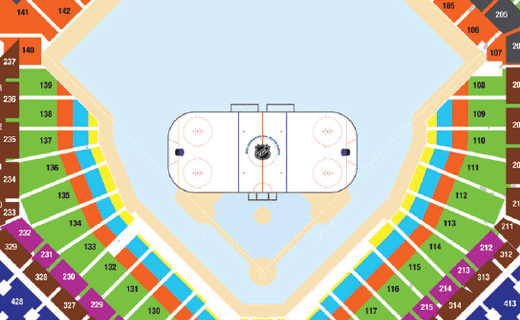 When news of Penn State playing an outdoor game first leaked in July, I got in an argument with a friend over the potential attendance. My argument, in a nutshell, was "Don't be blinded by what you see from the games that get the press. Tons of these types of smaller games are played ancillary to bigger ones, and most of them don't draw very well at all. If there are 5,000 people in Philly for Penn State-Neumann, that would be fantastic. We're still a club team, and they're Division III."

The friend remained adamant that the game could fill over half of Citizens Bank Park's 43,647 seats. I thought (and still think) that he was crazy. But he did drop an interesting idea on me during the conversation that I couldn't really counter: they got 33,861 to go to a Pittsburgh Pirates game when THON (PSU's world-famous Dance Marathon, for you outsiders) received a portion of ticket sales. Do the same for this one, and people will show up almost regardless of the product.

Unfortunately, we're probably too far down the road to realistically do that (or, given recent events, a similar idea involving RAINN) now. The game was made official and tickets went on sale last Thursday evening, 27 days before it's to be played. Even after Philadelphia was awarded the Winter Classic on September 26th, it took more than two months for everyone to be satisfied with their slices of the various schedule and money pies related to this tilt. I can only imagine what might happen if someone stepped in now with "hey, we should give a dollar from every ticket away!" In light of the $12.50 in handling and fees I paid on two $10.00 tickets, the explosion of Comcast-Spectacor president Peter Luukko's head may be a part of that.

To be fair, the THON tie-in might not be needed for a solid crowd. In the first few days since the announcement, I've been impressed by what I've heard from fans. Universally, they're thrilled about this game, and many who aren't regulars at every single Icers home game are planning to attend. That's a great start, and I'm confident that the final number will be much better than the disaster of 1,711 for Connecticut-Sacred Heart in Hartford in February or the 2,800 who attended DIII game Adrian-Concordia at Michigan Stadium last December. Really, the x-factor in terms of attendance will be how heavily the Penn State name and almost-DI status resonate with the general Philadelphia public versus "club team vs. DIII team" and "the Winter Classic is over, we've moved on to the next thing." There's just no reference point for that one.

I realize that I probably sounded rather harsh in my post relating the announcement. While everyone else was trotting out the perfunctory release, I was complaining that it took too long to finalize. You probably can't find a single negative word anywhere on the internet about this game that doesn't appear on this blog, and I really hope that people don't get the wrong idea when it comes to my opinion.

Quite simply, I'm pumped for this game and I'm thrilled for the players, coaches and fans who don't get this experience every year. This is new, uncharted and exciting territory for PSU (as opposed to Michigan and their nonchalance about playing outside). And it's going to be a great match as well, one that will test the limits of the Icers' abilities. My only disappointment is that finalizing things wasn't done quickly enough to allow a buildup appropriate of what should be a tremendous hockey game or to allow a more reasonable period to for some to plan travel around the holidays - and no, I don't believe the blame for any of that lies on the PSU side of things. Put it together with the Winter Classic announcement delay and there's a common thread.

There's still a chance to get this thing right, to make it stand out from the litany of games that pop up any time an outdoor rink shows up somewhere. Joe Battista, never one to pass on a good marketing opportunity, is trying to get the game on television. That would be fantastic. What would also be fantastic is seeing some push outside of the usual hockey-centric channels. I'd love, for example, to receive a Nittany Lion Club email talking up this game in between the weekly "don't hate us or punish the student-athletes for Jerry Sandusky" messages and the every-other-day renewal reminders. The idea behind THON involvement, obviously, was to get the event into the mainstream PSU awareness (while also raising money for a great cause). Even if that ship has sailed, a little bit of support from Jeff Nelson's sports information department and a few bucks spent advertising in Philadelphia would go a long way in my opinion.

If Penn State is going to be a force in NCAA Division I hockey, statewide support - like most successful programs enjoy - is going to be vital. What better way to launch that effort than with a bang in Pennsylvania's largest city? That bang is still possible, it's just going to take more gunpowder in a shorter time frame.
Posted by Kyle Rossi at 3:04 PM