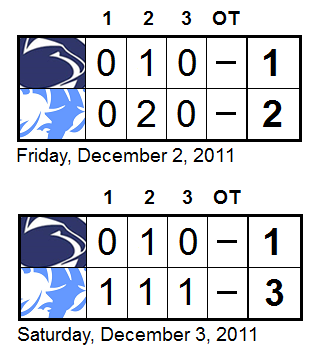 If elevating a program was a straight-line process, everyone would do it.

As I mentioned on Friday, these were large games. Unfortunately, they turned into damaging losses as Penn State attempts the nearly-impossible balancing act of preparing for the future while trying to make one last run to the ACHA national tournament. Achieving that second goal will require winning some poll-shifting ACHA games, and PSU now has two fewer opportunities to do that.

That's not to say that there aren't positives, a list that as usual has to start with Katie Vaughan. The sophomore, quite simply, continues to give PSU a chance to win every night. Friday provided another excellent demonstration via a 40-for-42 effort (part of 65-for-70 over the course of the two games).

This 2011-12 group has also proven to be extremely resilient. When a team faces a 2-0 deficit against a good opponent, as PSU did in each affair, there are two diverging ways things usually proceed from that point: fight or flight. The Lady Icers proved to have plenty of the former, as Madison Smiddy scored on Sydney Sherman's helper Friday to cut the deficit to one with over a period to play. On Saturday, in the dying moments of the second period, it was once again the Grand Rapids, MI newcomer playing an important role. She tied up a defender, which allowed Tess Weaver to collect her own rebound behind the net, swing out to the front and beat Kayla DiLorenzo on her backhand.

In both cases, but especially on Friday, further comeback efforts were short-circuited by untimely penalties. In that first tilt, PSU was whistled for five of the last six infractions, some on questionable enough calls to leave at least one team member call diving and embellishment "the story of our weekend." The result was two URI power play goals, one each game, that essentially stood as the final margin (the Rams' third goal Saturday was last-minute window dressing).

Perhaps that serves as the perfect lead-in to the best news of all: another shot at URI is in short order, and those games will open the spring home schedule on January 6th and 7th. First though, a home-and-home with NCAA Division III Neumann, the former employer of assistant coach Gina Kearns, will close the fall semester. The home game in that set is Saturday at 7 p.m., while Friday's game, also a 7 p.m. start, will be streamed on FastHockey.com.
Posted by Kyle Rossi at 12:19 AM