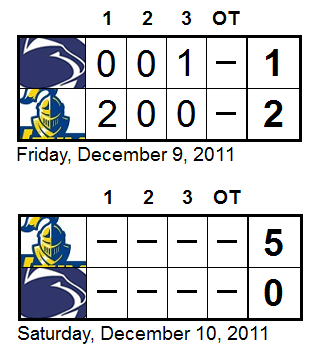 Friday night's affair, in Aston, PA and live-blogged at the bottom of this post, was particularly excruciating. NU got on the board both first and second in the opening frame off of the sticks of Kristine Acosta and Nicole Alexopoulos (the latter on the power play), and it looked like the Knights might blow PSU out of the rink early.

Then, on the way to a rout, a funny thing happened. Katie Vaughan kept PSU in it long enough for the Lady Icers to gain in relative strength as the game went on, with one notable close call coming on a potential Tess Weaver power play goal that was the victim of a quick whistle midway through the second. A senseless head contact major infraction by NU's Olivia Pryzbylkowski against Allie Rothman gave PSU an extended power play, and Sara Chroman made the Knights pay with a point blast to halve the lead early in the third. Despite several quality chances in the final 16:21, the Lady Icers were unable to dent NU goalie Allie Frank for a second time.

Any hopes of carrying that game's trajectory into the Ice Pavilion half of the home-and-home Saturday night were decisively smashed. Here's the entirety of the available information, courtesy of the Neumann site recap. From the sound of things, it seems as if most of NU's best players Friday were also their best the next day.

Edie Brenning notched two goals for the Knights, including the opening tally. She also had an assists. Ang Gilmour and Jennie Greenlee added a goal and an assist. Lynsey Nakamura also lit the lamp. Allie Frank had the shut out in net.

The Lady Icers are now on semester break, with the next games scheduled against rival Rhode Island on January 6 and 7.