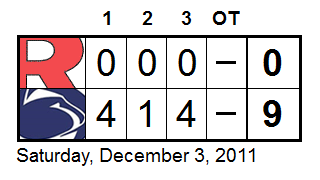 A lackluster second period was sandwiched by first and third periods borrowed from Friday night as the Icers (13-1-0) rolled to a 9-0 win over No. 21 Rutgers to complete the weekend sweep/blasting.

In this affair, Tim Carr recorded his first Icers shutout with a 15-save effort. PSU once again received balanced offensive output, with seven different goal scorers headed by two each from Michael Longo and Chris Cerutti. The team flexed its depth muscle and received numerous contributions up and down the lineup with the entire Kurt Collins-Eric Steinour-George Saad line sitting this one out, as well as Nate Jensen and the injured Taylor Holstrom.