Gunning For a Record 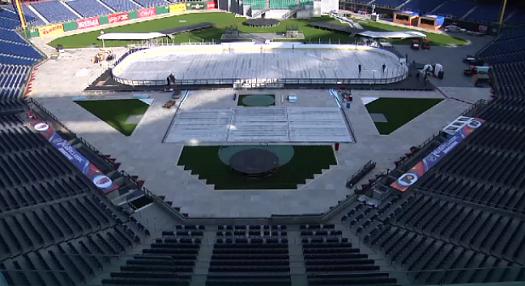 Citizens Bank Park has a listed capacity of 43,647 for baseball, and it's hockey capacity is even greater, thanks to seating added to areas normally occupied only by the Philadelphia Phillies and their opponents.

How many of those seats will be filled for Penn State vs. Neumann on January 4th? Your guess is as good as mine, but regardless of the answer, it stands a good chance of setting a record. Maybe two.

We're all familiar with the Greenberg Ice Pavilion attendance record - 1,603 against Rhode Island on January 13, 1990 - largely because it was perpetually in the first few pages of the program before omission in recent seasons. But what's the largest crowd to see the Icers play at any location?

My first instinct was to look into Penn State's appearances at Mellon Arena. On January 3, 2003, Penn State played Washington & Jefferson. It was part of a doubleheader with NCAA DI teams Ohio State and Princeton, making the attendance easy to look up. That night's crowd of 5,430 is a nice starting point, although it was undoubtedly hurt by OSU's football team playing for the national championship that night.

On January 8, 2010, Penn State again took to the Igloo, against the ACHA version of Robert Morris. Thanks to a gongshow of technical problems, that game became a two-period exhibition. Fortunately, the crowd of 3,654 for the NCAA Robert Morris-Miami game that was also part of the Pittsburgh Hockey Showcase that day tells us those issues won't mar the PSU attendance mark.

Next, I took a look at games the Icers have played at the Tucson Convention Center, Arizona's home rink. The Wildcats (formerly Icecats) and their 7,712-seat behemoth have long been known for some of the ACHA's largest, most raucous crowds, so that seemed like a logical next stop. Thanks to some legwork I did early in TYT's history, I got a quick boost in my search.


The Icers beat Arizona 7-3 on Friday night in front of 6,800 screaming Arizona fans. It was the biggest crowd ever to see the Icers play, and was topped the next night by Saturday's sold-out attendance of 7,200.

I think I just found a winning lottery ticket, sparing me from days of fruitless research on games from 1971 through 1994. Nice. "Saturday" in the quote is also known as January 8, 1994, and PSU lost that game to the Icecats 6-3. While the Icers have been to Tucson five times since then, none of those with listed attendances approach 7,200. In one notable game, Penn State's 8-3 win over the host Icecats at the 2001 ACHA national championships was witnessed by 5,000.

When I shared this news with an UofA-affiliated Twitter follower, he told me that former coach/overlord Leo Golembiewski had a penchant for inflating crowd numbers. The divisible-by-100 aspect to all of these figures probably lends credibility to that idea. Still, it's what we have, so we'll just go with it.

A question that comes to mind at this juncture: where else have the Icers played since 1994 capable of beating 7,200, knowing that Mellon Arena has been ruled out? Answer: nowhere. The Von Braun Center of Alabama-Huntsville (an October, 1996 opponent) is the only one that comes close, but it falls a little short with a listed capacity of 6,602 for hockey.

So 7,201 on January 4th would be the largest crowd to ever see the Icers play. If talking about the "Penn State hockey" record and not the "Icers" record, it could be a short-lived mark with games at Rochester's 11,200-seat Blue Cross Arena and Wisconsin's 15,325-seat Kohl Center next season (not to mention other possible large venues like Pennsylvania's two NHL and two AHL arenas), but nevertheless...

You may be wondering about Neumann as well - thankfully, that research is a lot more cut-and-dried thanks to collegehockeystats.net, which includes box scores for every Neumann game from 2001 through the present. NU's Division III independent years, 1998-2001, are largely addressed by USCHO. However, USCHO is missing box scores for 15 of Neumann's 63 games during this period (one of which is a 4-1 win over Penn State - Delaware County in the Knights' inaugural season), and they also use "NA" for attendance on a few other games.

In any case, the number to beat for Neumann, according to the available data, is 3,731. That throng comes from a 7-3 loss at Utica on November 6, 2009. With the exception of the 2009 DIII Frozen Four (topped by 3,141 witnesses to NU's national championship), every crowd of more than 3,000 to see Neumann did so at Utica's Memorial Auditorium, the home of DIII's attendance king since 2006-2007.

While all of that does leave a little bit to interpretation, keep in mind that outside of Utica and its 4,000-seat barn, only three DIII schools - St. John's, Wentworth and Fitchburg State - even have the capacity horsepower to top 3,731. Neumann did not play any of those schools (including Utica) in the 1998-2001 period not comprehensively covered by collegehockeystats.net.
Posted by Kyle Rossi at 2:54 AM