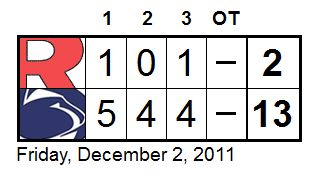 Fresh off of retaining their No. 1 ranking in the latest ACHA poll, the Icers (12-1-0) dismantled No. 21 Rutgers 13-2 in a game that was about as competitive as that score makes it sound.

There are a lot of impressive-sounding ways to slice up a 13-goal output, but perhaps the most telling is this: nine of the 12 dressed forwards scored a goal, including Tommy Olczyk's hat trick and Dan Meiselman's pair. Toss in assists - Justin Kirchhevel had four of those to go with his goal - and the number with points jumps to 11 of 12, along with four of the seven defensemen and goalie P.J. Musico. Another statistical snapshot that effectively captures the spirit of the thing is that Rutgers only managed three more shots than the Icers' goal number. Stated another way, a 25 percent save percentage would have been enough to win the game. However one chooses to break it down, the math works out to one of PSU's most impressive wins of the season, and against a solid club that will appear at nationals.

The two teams are back at it tomorrow afternoon at 3:30 p.m., Penn State's final home game of the semester.