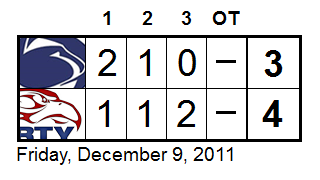 The error-prone Icers played their worst game of the season and opportunistic Liberty was more than happy to make them pay for it in a 4-3 Flames victory in the front half of the semester-closing series.

Despite an uneven first 40 minutes, PSU was still in a good position to win, up 3-2 thanks to yet another shorty from Justin Kirchhevel, a Rich O'Brien blast and Paul Daley doing what he does in front of the net. However, the game swung around on an long, but empty, stretch of power play time bridging the second intermission, much of it with a two-man advantage. It seemed almost inevitable that PSU's slim lead wouldn't hold up after that, and sure enough it didn't, thanks to Brent Boschman and Jake Hannon goals midway through the third.