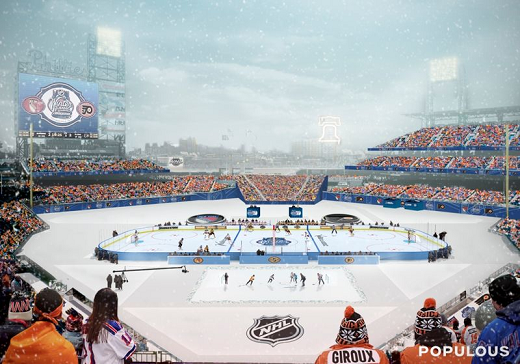 Someone found a new angle on the outdoor game, as crazy as that sounds.


Following in Boston’s footsteps, could Philadelphia support another outdoor hockey event in the future?

While there isn’t as large of a following for college hockey in the area, Penn State is looking to promote their advancement to a Division I Hockey program for the 2012-13 season.

"There isn't as large of a following for college hockey in the area" is a flaming pile of understatement, since Philly is sort of a dead zone for DI (something that's hard to find in the northeast part of the country). Outdoor games where college hockey is the entree work in Boston because there are a large number of established programs in the area (including two all-time giants in BC and BU), and a bunch of others where one only needs to drive across a tiny New England state or two to be in Boston.

What about sliding across the commonwealth with a tripleheader of PSU-Robert Morris women, Robert Morris-Mercyhurst men and PSU-Ohio State men at Pittsburgh's PNC Park? Involving all three in-state DI hockey schools and another in an adjacent state with a decent following in Western PA? Yeah, that could work.

A nicely done semester-in-review piece on the Icers.

It was a tight call between this and something showing actual, current progress on the ice at Citizens Bank Park. I decided that this is more fun.

I caught this news roughly 12 seconds after I started thinking about how it seems like fewer "auxiliary" games than usual are popping up around the Winter Classic. There's Penn State-Neumann on the fourth, of course. Malvern Prep-LaSalle precedes it that day. The AHL gets its turn two days later with a Hershey Bears-Adirondack Phantoms tilt. Now there's this all-ACHA affair on the fifth.

Wait, why does a Drexel-Villanova game have a zippy name and logo, yet PSU-NU doesn't? 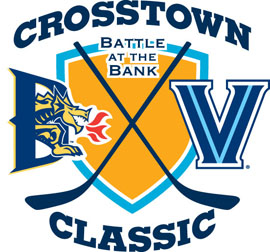 This article, and everything else I find about the outdoor game that covers new territory, goes on the dedicated TYT page for the event - because of the page, I'm not going to automatically include everything in Three Stars, so you might want to check over there periodically. Sorry, had to get one more plug in.

This popped up on the internet early in the week, and I needed to sign in to Google to see it. Just in case you have an issue in that department (you shouldn't, I tweaked it for mass viewing): the gist of it is that given recent events, Penn State should change its athletic branding to... 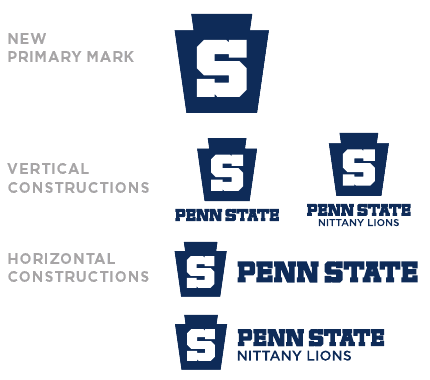 It's well done, and I don't have a problem with change in and of itself, but...
Positives? Sure. I dig the keystone, and have long felt it should be a bigger part of Penn State's branding.

In a light column serving as an open letter to Santa Claus on behalf of the women's DI head coaches, here is what was requested from St. Nick for the CHA bosses.


Vince O’Mara, Lindenwood: A year ago, he was coaching Lindenwood’s dominant club program. How about a recording of “Both Sides Now”? I’d say Joni Mitchell, but in Missouri, maybe Willie Nelson is a bigger hit.

Paul Flanagan, Syracuse: I’m guessing that Flanagan envisioned being at a different point by now when he left St. Lawrence. The Orange have a lot of youth on the roster, and better seasons are likely ahead, but get him “Airplanes” by B.o.B., for those days when he needs a wish.

Josh Sciba, Niagara: In his first season as the head man, and not yet five years removed from his own playing days, Sciba is not that much older than his players. He needs a camera so that he can take photos of himself to show his grandkids some day and explain, “See — I was young once. And then I became a head coach.”

Paul Colontino, Robert Morris: These are heady times for the Colonials, as a program that has never won more than 12 games in a season or lost less than 20 sits at 11–2–2. I’d suggest some sort of calendar or journal with an inspirational message for each day or week, and it wouldn’t hurt if those messages are especially meaningful on the dates when Mercyhurst is scheduled.

Mike Sisti, Mercyhurst: Sisti needs a league rival. He doesn’t know it; he probably thinks he already has one, but I don’t see anyone in the CHA capable of beating Mercyhurst twice in the same weekend. Just don’t expect him to thank you the weekend it happens. Keep this in mind when you’re getting the gifts for Lindenwood, Syracuse, Niagara, and Robert Morris. While you’re at it, you may want to get started early on Penn State.