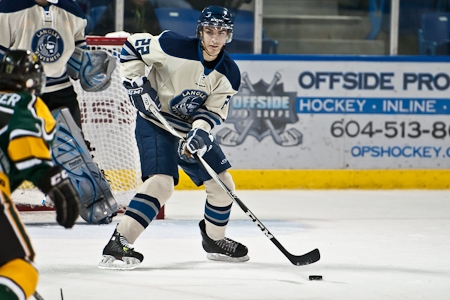 One of the difficulties Penn State faces in building an elite program is in recruiting. While Guy Gadowsky and company are trying to fill out an NCAA roster, most good programs with NCAA talent already in the fold are recruiting several years down the road. Every other Big Ten club, for example, has at least one player in their 2014 class already, with Michigan State having three. However, according to the website of the BCHL's Langley Rivermen, via Chris Heisenberg, PSU has joined the club as well, thanks to 16-year-old defenseman Bo Pellah becoming Penn State's first 2014 commit.

Despite his slender build, the left-handed shot has had a fantastic rookie season in the BCHL playing against people sometimes four years his senior. The league's media voted him best 16-year-old in the Coastal Conference (with 88 percent of the vote) at the season's halfway point, and he's leading Rivermen defensemen in scoring.

Count the WHL's Spokane Chiefs among those who knew about Pellah before that, as they selected him in the sixth round of the 2010 WHL Bantam Draft. Said Spokane Director of Player Personnel Chris Moulton at the time:


"Bo is a smooth skating, smart defenseman who keeps his game simple and will make a lot of plays."

He's also been described by observers as playing a "steady game" and "composed with the puck." Sounds very Juha-esque. Such knowledge may have come from the 2010 Western Canada Bantam Championships, where Pellah helped his Burnaby Winter Club Bruins squad to a third-place finish with a goal and three assists in five games.

Incidentally, Edmonton Oilers standout rookie Ryan Nugent-Hopkins also played for both the BWC and the NW Giants. Here's hoping Pellah elects to skip the whole "play in the WHL" part.
Posted by Kyle Rossi at 6:30 PM