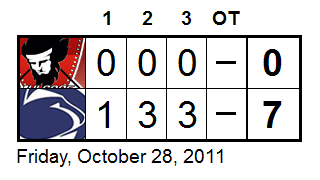 In the buildup to their game against the California University (PA) Vulcans Friday night at the Ice Pavilion, here's what some of the Lady Icers' personnel had to say.

"As long as you keep improving, that is all that matters. You may beat the team or you may lose." - junior forward Katharine Gausseres

“We are more worried about how we can play as a team rather than who our opponent is." - freshman forward Tess Weaver

The team's mantra of only being concerned with itself seemed appropriate following a game where PSU might as well have been the only team on the ice - a 7-0 romp over the Vulcans in a successful return home and to ACHA competition.

The Lady Icers (3-3-0) took advantage of a return home and a return to ACHA competition by pounding the California University Vulcans 7-0 at the Ice Pavilion Friday night.

Indisputably, the star of this tilt was senior forward Sara Chroman, who had a hand in the first five goals of the game. Her salvo began on PSU's only power play opportunity of the game and continued through a pair of early second period tallies. Unsatisfied with the natural hat trick, she set up Kate Christoffersen late in the middle frame, then polished off her evening with a fourth goal early in the third. Brandwene was clearly pleased.

I'm no soon-to-be-DI hockey coach, but I do know that constant motion is a good thing in a hockey game.

Cara Mendelson and Elizabeth Denis (who also had two assists and a tremendous write-up in the Collegian this week) rounded out the scoring, while Madison Smiddy added a pair of assists. Denise Rohlik, Chelly Deiling, Allie Rothman, Katie Murphy and Weaver added solo helpers.

In contrast to last weekend, Katie Vaughan had a light workload, saving all 13 she faced before being lifted in the third to get Mary Tonetti some work.

Penn State will now plow back into NCAA Division III ECAC West competition with two games at Chatham November 4th and 5th. They'll have a nice measuring stick for that game ahead of time, as California will attempt to bounce back from the Friday's drubbing quickly with games against the Cougars Saturday and Sunday. The Lady Icers and Vulcans can then compare notes on Chatham if they so choose when they meet up again on November 11th.
Posted by Kyle Rossi at 2:46 AM