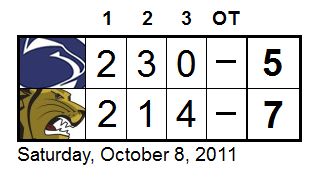 The ACHA Division 2 Ice Lions tend to get lost in the shuffle sometimes. In some ways, ugly stepchild status is just a fact of life when you have a pair of NCAA Division I programs coming to campus.

PSU is participating in the ACHA Division 2 Showcase in St. Louis this weekend, after dispatching of their first four opponents by at least four goals. Things started well enough in the Gateway to the West, with the Ice Lions topping DePaul in overtime 3-2 on Friday thanks to a goal by senior captain Jim Recupero 35 seconds into the extra session. There was only one problem: Saturday's opponent, Minnesota-Crookston, was unable to make it to the showcase.

So you're in St. Louis, you have an unwanted hole in your schedule...naturally, you call up Lindenwood and have them fill the slot, right?

And, stunningly, the Ice Lions didn't give an inch.

I was able to watch the first period on the team's shiny new UStream feed, before technical issues hampered the picture in the second period and cancelled it altogether in the third. What I saw was a talented, well-coached team that gave the ACHA's reigning royalty all they wanted and perhaps more.

PSU landed a body blow on the very first shift of the game, when Recupero outworked the Lions' D and Creek Lewis was the beneficiary of the resulting loose puck on the doorstep for an early 1-0 score. On a power play a little later, it was once again Recupero working behind the net off of a Mac Winchester point blast - but this time finding the third member of the top line, Patrick Kinch, in front for a 2-0 lead. In the meantime, the Ice Lions were forced to a couple of early penalty kills that could have flipped the game rather rapidly, but a disciplined unit kept LU to the outside, and goalie Ryan Demuth swallowed up the ones that did get through, preventing any rebound chances.

When Peppi Sipila and Gorczyca scored to even things up late in the first and the stream went down shortly after, things looked to be going pear-shaped in a hurry on all fronts. But in the second period, PSU regrouped and surged ahead once more before Lindenwood's third period comeback, which - according to word on the street - was aided by some homertastic clock shenanigans and questionable officiating.

Regardless, this is a team that deserves our support. They wrap up the showcase Sunday with SIU-Edwardsville, and play three in a row on the road after that, but return home October 29th against Indiana (PA). Here's hoping it's with a 9-1-0 record and in front of a good crowd ready to see a hard-working hockey team.

And hey, maybe we should start thinking about multiple national championships for Penn State hockey this year. Why not?
Posted by Kyle Rossi at 9:16 PM