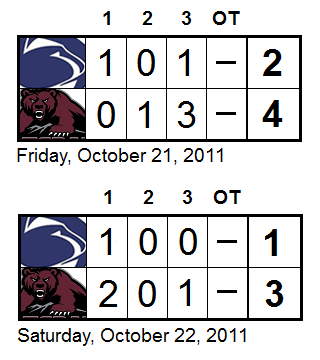 Outscored, but not outclassed.

That's the impression I had after following the Lady Icers' (2-3-0) games against NCAA Division III SUNY-Potsdam this weekend, despite the two defeats.

Friday night's game started with a whole lot of Katie Vaughan. She kept PSU in the game despite an early Bears barrage and long enough for Katharine Gausseres to scoop up a loose puck at center, swoop in on a breakaway, and score for a surprising 1-0 Lady Icers lead.

It took a deflection and a rebound of Breanna Roy point shots for Potsdam to finally solve Vaughan, who finished with 44 saves on 47 shots. Jessica Silveira scored the first of those goals (the deflection one) 4:46 into the second, while leading scorer Annmarie Lewis gave finally the Bears the lead for good 2:01 into the third, on Potsdam's 32nd shot of the game. Some penalty trouble for Tess Weaver and Sara Chroman seven minutes later gave the Bears a 5-on-3, which was cashed in for a two-goal lead with 10:20 left.

Just when it looked as if the Lady Icers were ready to fade out of the game, Weaver - who had five of PSU's 22 shots - redeemed the situation with her own power play goal off a rebound of Madison Smiddy's shot to give Penn State life with 5:05 left. However, the Lady Icers only managed a Smiddy drive on goal from that point on, and a Bears empty-netter with 11 seconds remaining effectively ended the affair.


On Saturday, it was Potsdam striking first, on Izzy Fayerman's deflection goal 8:21 into the game. Just 1:25 later, Roy went off on a checking penalty, and Weaver made the Bears pay with a blast from the slot, coming off of Chroman's pass. The game remained level until Potsdam got the goal and the lead back on Silveira's third goal of the weekend, which happened with freshman defender Paige Harrington in the box for hooking.

Thanks largely to Vaughn's 20 saves on 20 shots effort in the second period (part of her 52 of 54 for the game and her incredible 96 of 101 over the pair of games), the score remained 2-1 Potsdam early in the third. The Lady Icers took to the power play 2:48 in with plans of once again drawing even, but Caitlin Manahan's unassisted shorty gave the Bears a secure 3-1 lead, which they carried to the finish despite PSU being on the power play for the final 2:42 of the game.

The Lady Icers return both home and to the ACHA on Friday against California (PA) at 7:00 p.m. before going back on the road to a Division III team's rink - this time, Chatham, one of Potsdam's ECAC West rivals - on November 4th and 5th.
Posted by Kyle Rossi at 10:54 PM