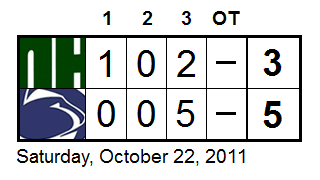 The top-ranked Icers completed the sweep of Ohio behind an uneven but gritty effort that finally broke through OU's stellar defensive zone play in the third period. Bobcat Brett Agnew once again burned PSU on the power play in the first, and that goal held up until a wild final period that saw (among other things) a Kurt Collins hat trick which included two shorthanded goals, a penalty shot and a P.J. Musico attempt at a goal on an empty net.