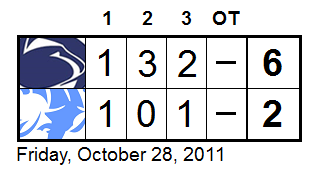 Chris Cerutti made his triumphant return to the lineup with a power play goal - and some prime minutes on the top scoring line after an apparent injury to Tommy Olczyk - in a solid Icers victory at the Brad Boss Ice Arena. Before leaving the game, Olczyk scored twice to bring his team-leading goals total to eight, and Eric Steinour (one goal), Kurt Collins (one goal, one assist) and George Saad (two assists) continued to provide fantastic play at both ends. Tim Carr got the win in his first start of the season.

The same two teams will get back after it tomorrow at 4:00 p.m. As usual, Steve Penstone will have the call on UStream and 3WZ.