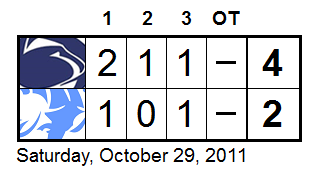 The top-ranked and 7-0-0 Icers completed a gritty sweep over Rhode Island with a 4-2 win on Saturday. Although Bryce Johnson, Michael Longo, Jake Friedman and Taylor Holstom scored and twelve Penn Staters in all registered a point, the true star of the game was PSU's penalty kill. The Rams were 0-for-7 on the power play, including an empty 5:41 stretch late in the third period, 1:38 of which was a two-man URI advantage. Penn State needed every ounce of that effort to overcome notorious Icers killer David Macalino's pair of goals.

PSU is back at the Ice Pavilion Saturday, November 5th at 7:00 p.m. against NCAA Division III SUNY-Fredonia.