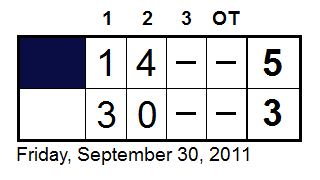 Straight away, I'd like to apologize for the fiasco surrounding my promise to live blog Blue/White. First, an unbreakable commitment (a birthday dinner for my father) was dropped into my lap the day before (thanks, Mom). So that took the "live" part off the table. My backup plan, to watch the game later that night and use it as a dry run to practice live blogging games that count, was done in by the fact that the recording wasn't archived on UStream.

None of that is meant as an excuse. Despite my self-effacing tendencies, I hold myself to a pretty high standard, and I didn't even come close to meeting it here.

With that out of the way, here's what someone who actually saw the game - the Collegian's Christine Newby - wrote about it:


Four unanswered goals by the Blue team in the Icers' annual Blue/White game resulted in a 5-3 victory Friday night at the Ice Pavilion.

The four goals, all coming in the second half, began with sophomore defender Nate Jensen, collecting freshman forward Tommy Olczyk’s rebound and putting the puck past goaltender Matt Madrazo.

Kirchhevel said a month of practice was tough and the sophomore added he was glad to finally get a chance to play in a game.

Assistant coach Keith Fisher said the guys are sick of practicing and the Blue/White game was not only good for the players, but the coaches as well.

“It’s nice for the coaching staff to evaluate guys in a game setting versus practice,” Fisher said. “They are two different things and a lot of times you get two different players.”

Freshman Brandon Russo and seniors Chris Cerutti and Dan Petrick were out of the lineup due to injuries. Cerutti injured his left knee on Aug. 23, and Icers coach Guy Gadowsky confirmed on Aug. 24 the forward sustained a Grade II medial collateral ligament (MCL) sprain. Petrick is out with a small fracture in his left wrist.

“I don’t know too much specifically about it, but he’ll be out for a couple weeks probably,” Fisher said.

The Blue/White game was two, 30-minute halves with a running clock.

As for the next week, the Icers have their first regular season game Oct. 7 against Lebanon Valley at the Ice Pavilion.

Of course, she wasn't the only person who was there. Ben Jones of Black Shoe Diaries also went and brought back one of the more unique things I've seen in a while - a series of 12-second, slow motion videos. Here's a taste, with Eric Steinour's first-half 2-on-1 goal courtesy of George Saad's feed, but you need to go to the link and watch all of them. Do it. Now.

Others who saw the game include the man known to many of you as IcersGuy on BSD as well as Icers SID Troy Weller. Here are some of their thoughts collected from Twitter.


It's an interesting dynamic - transfers can be dangerous on their own; returning Icers still dangerous together.

No goalie looked outstanding, but all 3 looked solid. At this point, I'll be happy with any starting.

Kirchhevel said the veterans are really doing a good job of taking the younger players under their wing.

Olczyk said guys have been playing soft in practice the past couple days, said they need to stop that but don't want to hurt anyone. He also said the gelling in the locker room is going extremely well because the main goal is an ACHA title.

So it's Blue-White game this week, then a step backwards next week vs. LBV, then a huge jump forward on the road @ Illinois. Yeesh.

Yeah, pretty much. This one's going to feel like a Game 7 compared to next Friday.

The final piece of this post was meant to include thoughts from the other side of the Ice Pavilion surface, via alumnus coach Mark Horgas, but we've learned that he was unable to fulfill his coaching duties Friday night due to a personal issue. TYT passes along its best wishes.