If you're not on the PA Puck bandwagon yet, you need to get there. They've been pumping out a quality PSU piece once a week. I can barely keep it together pumping out five crappy pieces a week, and I don't cover other teams.

2. Solid Start
(The View From the Booth)

Steve Penstone did some great work this week - adapting pretty well to a tough setup for the games at Illinois, grinding out fantastic intermission interviews with Ed Olczyk and Teddy Hume...so here I'll link the one thing he's done in the last week that I don't think I linked anywhere else: interviews with Bryce Johnson and Guy Gadowsky.

Whatever happens, please don't ever let me lose perspective on just how cool it is that Penn State hockey is now worthy of conversation in major papers. Oh and hey, there's a video too, in which we find out that The Namesake wants the "rockingest" arena in college hockey.


Best of the Rest

The Collegian decided to write two articles about the Lady Icers this month. Wasn't really expecting that.

Remember that fundraising we were doing that we haven't heard anything about in a while?


“Our goal is to raise another $10 million,” [Joe] Battista said. “We’ve raised $3 million in addition to the Pegulas’ gift. We have a goal of – at minimum – raising $7 million more, and that helps put us into the area where as long as we’re filling the building, keeping the ice rented and selling merchandise, we’re going to be able to meet our goal.

My only question there: is it just me or is fundraising lagging a little after a hot start? Battista's words seem to make it pretty clear just how tight of a rope the program will be walking to remain self-sufficient, so hopefully that $7 million is coming. As well as all of that other stuff that also needs to happen. 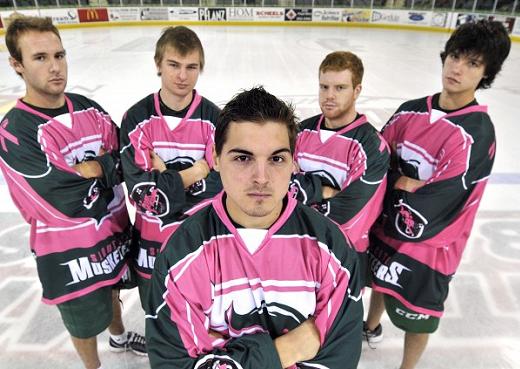 I'm not going to complain that the Journal ran a picture of last year's team calling it this year's pink jerseys. Not when Tommy Olczyk (center) and Matt Skoff (far right) are included. Also, as current or former Muskies, both apparently like boobs.


1. The Muskies heart pink, and boobs!
$3 of every ticket goes to Breast Cancer Awareness for this Pink in the Rink Musketeers vs. Lincoln hockey game. Happening at the Tyson Events Center, the puck drops at 7 p.m. Saturday. Be sure to wear pink.

This guy's not a fan of what happened with ECAC coaching changes this past offseason, which obviously involved Gadowsky. I'm not a fan of this guy, so we'll call it even.

Surprise visitor at Icers practice last Wednesday: The Namesake, and a guy who holds his coat. 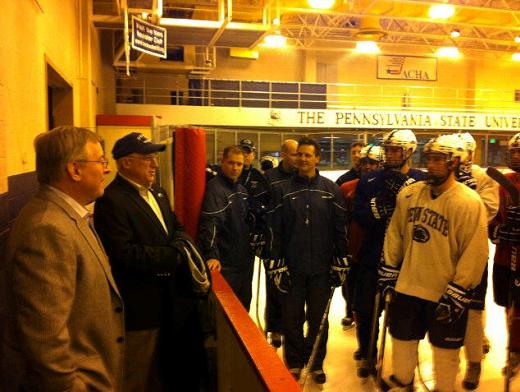 I dare you to find more fail in one paragraph.


Another Vee committed is forward Curtis Loik, who will join the Penn State Littany Lions. The Littany Lions, which will play at the NCAA Division l level for the first time in the fall of 2012 as an independent program. The following year they will move to the newly created BIG 10 hockey conference, joining Michigan, Michigan State, Ohio State, Minnesota and Wisconsin. Loik is excited to be part of the new program guided by coach Guy Gadowski.

The day before beginning the weekend set at Illinois, the team got the VIP treatment at a Blackhawks vs. Jets game.


Next year’s Brick City Homecoming opponent is Penn State, the upstart Division I program that was founded by Terry Pegula’s donation.

In 2013, Michigan comes to downtown Rochester. Yeah, I say the Tigers program is gaining in stature. When you can get the big boys to come to you, you’ve arrived.

"Big boys" before we play a single game? I'll take it.

The Minnesota coach is still not fired. Quite the opposite, actually.
Posted by Kyle Rossi at 3:35 AM