It's both a first and a last.

More specifically, it's a first last. The first time we'll say goodbye to an foe with some series history*. And the last time we'll ever play in the Big Pond - the University of Illinois Ice Arena, the ACHA's answer to Yost.

* Barring a nationals meeting and acknowledging the possibility of meeting to fill dates next year...we'll just assume that as I wax nostalgic throughout the season.

Let's get the obligatory pictures out of the way. 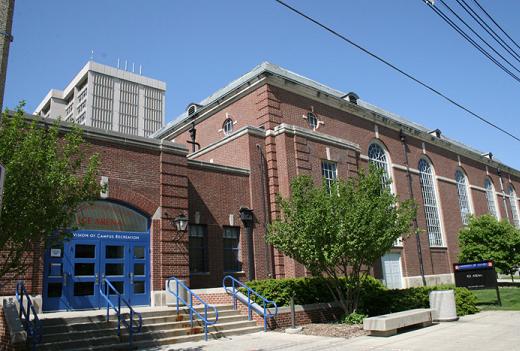 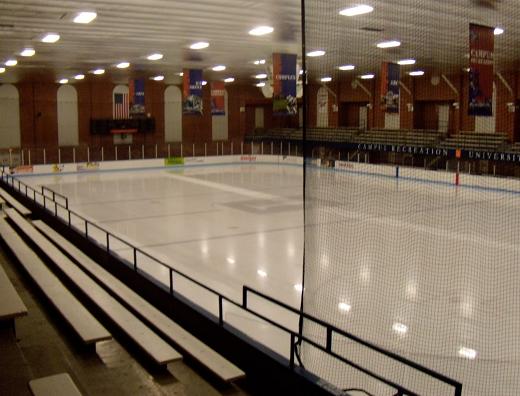 Illinois sneers at Delaware's Olympic ice with a monster sheet 115 feet wide. Given that, it's actually easy to forget that it's a little short at 195 feet. Still, it comes out to 32 percent larger than an NHL-sized surface and a unique adjustment for visiting teams. What's the adjustment? Hey, you're not the first person to ask that question.


That extra 35 feet is mostly outside of the faceoff circles. Joe Battista and Scott Balboni both said the key to winning was keeping the play inside of the circles and not getting out to the edges of the ice. I'm sure that Coach Guy will be saying the same this weekend.

Aside from the ice itself, the Big Pond is also one of the best places to watch a game - the seating is elevated giving both the intimacy offered by a small rink and the perspective usually not. If you're a glass-banger, there's standing room underneath as well. Everybody wins in the facility built in 1931 and designed by the same firm that came up with (the original) Soldier Field.

Of course, the team that calls this venue home makes you enjoy it a little less. It's a tough place to win, and that's only in part because of the big ice.

Where you pick up the Penn State-Illinois hockey story largely depends on how long you've been around it. Perhaps you best remember the Fighting Illini as fodder for PSU and Iowa State at the Chicago Classic through the 1990s. Maybe to you, they're the almost-theres of the first half of the 2000s that couldn't quite reach the Icers, Eastern Michigan, Ohio and a couple of others, although Penn State did have to fend off the Illini in the 2002 title game. U of I has become much more than that since those two eras.

They usurped the title of "best school in a major conference for other sports playing ACHA hockey" (Is that a thing? It is now.) from the Icers effective with a 4-3 win over PSU in the 2005 ACHA championship game. They kept it despite PSU's title game returns in 2006 and 2007 with another title in 2008 - by putting up the only unblemished season in ACHA history, finishing 38-0-0. And still after that by once again beating the Icers in the 2009 semifinals (although they lost the championship game to Lindenwood in a repeat of the 2008 title clash).

Then, something kind of funny happened to the Illini last year: they regressed to the point where they missed the tournament for the first time since 1996-1997's brutal 7-18-3 season. The 1997 indignity brought on the arrival of former player Chad Cassel who, now in his 15th season as head coach, has obviously brought the program to new heights. He's a two-time ACHA coach of the year winner (2003, 2008) and has been on the Team USA staff for the World University Games four times (2001, 2003, 2005, 2007). If it wasn't for someone named Guy Gadowsky, I'd be fine with calling Cassel the best coach in the ACHA.


To me, whether talking about the Gregg Cooper/Tim Danlow tandem, Mike DeGeorge, and more recently, Mike Burda and D.J. Kohler, the conversation about Illinois hockey has always started with goaltending. Now, it's Nick Clarke who has taken that lofty legacy and added his own mark to it. In fact, issues between the pipes were one big reason why the Illini ended up behind the eight ball early last year. Clarke's addition for the second half of the season helped to almost bring them all the way to Delaware, a path that included nine wins in their last ten games, including a sweep of tournament team Oklahoma.

He won't need to carry the load himself, however. The Illini boast a solid returning core of scorers, many of whom - Andrew Cardona, Sam Fatigato, Joe Sullivan and Mike McBride to name four - are seniors. But it's an underclassman, sophomore Austin Bostock, off to the quickest start, with four goals and seven points in the team's five games.

Those five games indicate sort of an uneven team still trying to recapture the form of a couple years ago. A home split against D2 Michigan State, including an ugly 1-0 shutout loss (despite 32 Illinois shots) opened the season, before the team took to the ACHA Division 1 Showcase in Springfield, IL last weekend. A second straight shutout loss, this one against a much-better Delaware team, opened things up at the showcase, but the Illini bounced back with a 4-2 upset of defending national champ Davenport behind Bostock's hat trick. The final game of the showcase saw Bostock put U of I up just 43 seconds in, but it was Sullivan's two late-second-period goals that clinched a 5-2 win over No. 11 Oakland. Clarke has been stout throughout, not allowing more than two goals in any game this year and boasting a 1.41 goals against average (with a .937 save percentage).


Illinois now has their eyes on a good showing against the Icers, which would almost certainly vault them from their current No. 16 station to a more familiar spot in the next ranking. Then after the two games, at 8:30 p.m. on both Friday and Saturday, they'll go one way, and we'll go another...