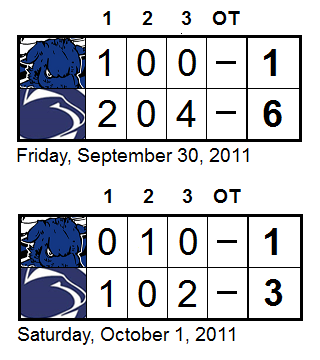 The Lady Icers got on track with a pair of satisfying wins against Buffalo at the Ice Pavilion this weekend to climb to 2-1-0 for the season.

Buffalo's Lauren Leeson opened the scoring with 9:12 left in the first period of Friday's game. But PSU's effort, much like the Blue/White game for the men, was driven in large part by outstanding games from newcomers as PSU ran off six unanswered from there. Tess Weaver, a freshman who comes from the same Pittsburgh Penguins Elite program that will give us Jill Holdcroft and Darby Kern next year, tied things up on a 5-on-3. New Jersey freshman Christina Hurle followed that up to give the Lady Icers the lead for good late in the first.

Weaver once again showed up in a big way in the third period, adding another goal and assisting on three as the Lady Icers cracked open a tight game. Brown transfer Elizabeth Denis added two goals of her own in the final stanza, while senior Kassidy Augustine was responsible for the remaining goal. The late-game dominance pleased Josh Brandwene.

Katie Vaughan went start to finish Friday night, saving 13 of 14. Buffalo goalie A.J. Sliwinski stood tall in the face of a barrage of Penn State shots, stopping 64 of 70 in defeat. On Saturday, Vaughan again got the call and stopped 17 more of 18 total shots.

That second game was even tighter through two periods as UB's Katie Wrona answered Lindsay Reihl's first-period goal with Allie Rothman in the box for contact to the head in the second. But once again, the Lady Icers rookies came through large following the second intermission, with Weaver (finishing the weekend with three goals and three assists) and rookie defender Madison Smiddy providing the final margin.

PSU is next in action on October 21st and 22nd at NCAA Division III SUNY-Potsdam. The Lady Icers will return to the Ice Pavilion (and to ACHA opponents) on October 28th against California (PA).
Posted by Kyle Rossi at 10:27 AM