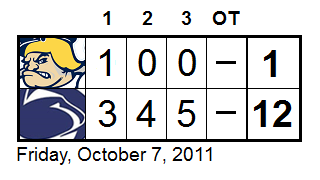 It feels really weird to be gearing up this early for a home game. While we weren't quite Kentucky with their legendary midnight games, those 9:00 Friday starts had kind of a cool, underground feel to them.

The legendary Rodney Martin just checked the PA. It works. This is exciting to me.

Starters just announced via @HockeyValley on Twitter: Paul Daley centering Kurt Collins and George Saad up front, Rich O'Brien and Dan Loucks on D, Matt Madrazo in net. The sophomore beats out Tim Carr and P.J. Musico for the opening night gig in an all-returnee lineup.

Steve Penstone is on the air, opening with the kick-ass past/present/future video!

"We're not caring about the opponent right now." - Guy Gadowsky in a pregame interview. Understatement of the year.

More D: Nate Jensen-Steve Edgeworth, Brian Dolan-Pete Sweetland. Musico will be the backup goalie. Thanks Steve - that saved me a decent chunk of the first period.

Notably not in the lineup: Tim Acker, Forrest Dell, Dan Meiselman, Ryan Seibolt and Nick Seravalli. Chris Cerutti, Dan Petrick and Brandon Russo are hurt of course. Not to say that someone else in that group isn't, those are just the public knowledge ones.

I'm trying and failing to get the game on my phone - 3WZ may be blacking out streaming during games. Oh well, it was a nice thought I had for 18 hours there.

Teams are on the ice. It's happening!

John Cappelletti drops the puck wearing an Icers jersey with his name and number. To the surprise of nobody, Daley wins it. Thanks again for the jersey for the Ace of Cakes, Balboni. /sarcasm

17:59 - Whatever Madrazo gives up with his aggressiveness, he makes up with his ability to start a rush...moments later Johnson opens his PSU account 2:01 in from Friedman and Morrone. Speed kills.

15:51 - Dolan picks up right where he left off last season - a sneaky wrister from the point makes it 2-0. Sweetland with his first PSU point.

11:46 - Not that it's the easiest thing to judge in this type of game, but I'm loving the chemistry of the Holstrom line so far. Some nice work leads to a quality shot from Kirchhevel.

10:11 - McDonagh shanks a prime rebound opportunity off of a Jensen shot. Still 2-0.

8:43 - Kirchhevel and Holstrom once again work together to generate a scoring chance. This one came from the latter but was deflected out.

8:15 - Holstrom sent off for a slash. Penn State is using a number of people on the PK with a generally high level of success.

5:13 - Olczyk restores the two-goal lead with his first, from Holstrom and Kirchhevel. At least I look smart sometimes. I totally missed it due to the obnoxious ads on UStream though. Some background there: 30-second ads are played at intervals, but at the bottom of the screen, it counts down the time until the next ad, giving you the option to play it now, or wait until the end of the countdown. I tried to time it with a break in the action. I chose poorly.

3:40 - Johnson with a nifty takeaway in the neutral zone leads to a chance for Morrone.

2:32 - The early PSU clinic has slowed down significantly as both teams take turns getting bogged down in the neutral zone.

0:00 - First period ends at 3-1 Icers. Shots were 22-3, I believe. One more quick thought on this one: I've been critical of Morrone at times, but he looks great on a line with an NCAA guy and a guy who tied for 7th in the EJHL in scoring last year.

Still 0:00 - Since Jaeger's at the game, here's my Jaeger/HMA story. We used to do player profiles for the program inserts, where we basically asked the same inane questions, then wrote it up in about half of a page. One of the questions was "what three people, living or dead, would you want to have dinner with?" I don't remember his first two, but the third was "Britney Spears, because I wouldn't mind punishing her for dessert." I printed it. That didn't end well for me, as I spent the whole pregame with a big, black marker.

The broadcast is off air to begin the second period, my apologies. I did briefly see that the Icers went up 4-1 early in the period though. Longo was the goal scorer.

15:30 - It's now 5-1 off the stick of Loucks. The broadcast is back up, but with the picture choppy beyond the point of usefulness. Most observations from this point will be relayed from Penstone in a sense.

13:56 - Steinour and Paul Daley with some tremendous PK work behind the net as the Icers kill one off to cut LVC's PP to 1/2 (I did see that one myself)...moments later, Josh Daley makes it 6-1. Steinour and McDonagh with apples. Shots on goal right now? 34-4. Wow.

12:00 - Another quality shift from the Holstrom line.

10:59 - Since I haven't talked about defensemen much (have I needed to?), Jensen and Edgeworth add an element in back that PSU hasn't had since Steve Thurston.

8:02 - Gotta give some credit to this Colin Catherman kid, a freshman in net for LVC. He's getting flat-out blitzed and holding up okay. On the other end, I feel bad for Madrazo, it's going to take a lot for his stat line to not suck thanks to the one goal.

6:40 - Holstrom puts back an Olczyk rebound for his first at PSU. That line continues to dominate and get a disproportionate amount of ice time. However, Olczyk is now off on a boarding call shortly after.

4:00 - The Icers seemed to take that LVC power play goal personally, as they've been in lockdown mode on the last two Dutchmen chances.

2:30 - Josh Daley started the game as the extra forward, but he's started to get worked in. He was on that last PK and was skating with Holstrom on his subsequent shift.

17:30 - P.J. Musico is in the game for the 3rd period. I get burned again by the whole "you have to refresh to see the next period" thing.

16:10 - This roster is oozing with talent, but it's just a click or two off sometimes as people are still wearing their metaphorical "Hi, my name is" stickers. Johnson and Jensen misconnect on a pass, but moments later, Morrone to Johnson leads to a scoring chance.

14:28 - Jensen goes Bobby Orr in a two-man play with Paul Daley for a pretty goal. Yeah, he's pretty good. But don't sell Edgeworth short either, he's maybe not quite as dynamic, but he's sturdy. 8-1.

14:07 - Penstone continues his Longo mancrush. Nothing wrong with that at all.

11:40 - Tensies. Loucks from up high gets in on the stat padding, may have been tipped. Kirchhevel and Olczyk with assist.

8:50 - One thing I like about Loucks: he's great at getting a heavy shot low and on target. Just caused a mild scramble.

7:58 - Speaking of shooting defensemen, Edgeworth now on the board as an Icer. 11-1. Cheese count: broken. Collins breaks it more moments later. Everyone scores tonight. Rodman leads a "we are Penn State" after each of the last two goals. New thing?

6:07 - Jensen with a bad turnover at the blue line, leads to a scoring chance by Schultz, but Musico answers the call.

3:40 - Their point made, the game decided long ago, the Icers seem content to let this one bleed out.