I think one key thing that distinguishes a good women's coach from a great one is this: the great ones consider themselves of the women's game, even though all (of the male ones) started in the men's game. They're not simply men's coaches who need a paycheck and are doing time until something "better" opens up - coaching women is who they are and what they do. Guess which one Josh Brandwene is.


“As my coaching style changed and evolved over what’s now 20 years as a head coach, I discovered (the women’s game) was an exact match for who I am as a person and a coach now. It was just a great fit.

“It was natural as far as who I am as a person and as a communicator. It just worked. It’s a hard thing to quantify, but it was absolutely the right fit for me and that has sort of helped serve as a springboard to where I am and why I’m such a really good fit for the institution here and for coaching the women’s program here.”

The brass visited the shiny new Compton Family Ice Arena at Notre Dame to get some inspiration for possible tweaks to the Pegula Ice Arena design. But one interesting story here: someone finally asked a very obvious question, concerning the fate of the Ice Pavilion.


“There’s lots of different ideas about turning [the Ice Pavilion] into everything from a high-performance training area that would be kind of a joint venture between athletics and kinesiology and making it into recreational space,” [Joe] Battista said. “There is always the option of keeping it as an indoor roller hockey, indoor soccer facility.”

The decision on what to do with the Ice Pavilion will be up to Penn State Director of Athletics Tim Curley and Mark Bodenschatz, the associate athletic director for facilities and operations, Battista said.

Do the second one, the roller hockey, indoor soccer thing. Please.

Eric Weiss from Onward State has ambitiously put together all of the known renderings of Pegula Ice Arena. While there's nothing there unseen to devoted TYT readers (note his source), it has the added advantage of analysis by someone who actually knows something about architecture - like, say, an architecture major from PSU's outstanding program.

Yes, I just linked myself.

But more importantly, I linked the Ice Lions who, at 5-2-0, really seem to have a new spirit about them under Josh Hand's direction. New website, new effort at media relations, new UStream channel with game broadcasts, and hey, the product on the ice isn't too shabby either - as mighty Lindenwood can now attest.

Sandwiching that effort at the D2 showcase this past weekend was a 3-2 overtime win over DePaul on Friday and a disappointing 6-5 loss to SIU-Edwardsville on Sunday in a possible letdown situation. Still, this has the look of a program ready to take the next step after barely missing nationals last year. They'll keep after that goal next weekend with engagements at Monmouth (October 21), at Rider (October 22) and at St. Joseph's (October 23).

Did the Icers have to shower after the Lebanon Valley College game before heading up to Paternoville? 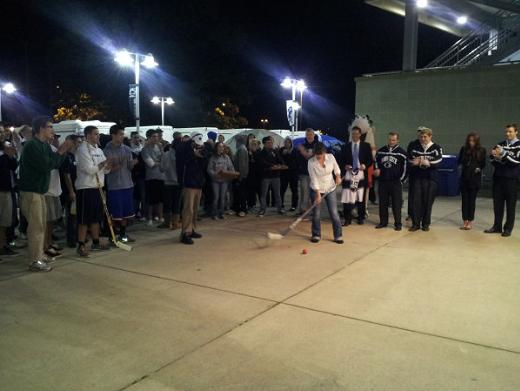 I shouldn't enjoy Rick Gotkin's continued shock over losing Taylor Holstrom and Nate Jensen to Penn State as much as I do. But it probably means that we got a couple pretty good players.

East: Providence, RI; Northeast: Manchester, NH; Midwest: Toledo, OH; West: Grand Rapids, MI. Book your hotels now. Actually, don't, we won't be playing there (unless you want to go and represent PSU regardless, of course). But we could play in the NCAA tournament - in theoretical land, anyway - and that's pretty exciting in and of itself.

The Frozen Four for the first PSU varsity season was previously announced in favor of Pittsburgh, PA and the Consol Energy Center.

It's a little frustrating when those who cover hockey on a part-time basis score a big interview...then ask the same questions everyone else asks. I swear I've read each of those answers about 30 times from different outlets. Granted, I'm not typical in that department. And please don't take this as me complaining about attention. There ain't no bad publicity.

Part of my routine involves searching for "Penn State hockey" on Twitter (thanks to the legendary Teddy Hume for that advice). Most of the time, I learn nothing except what's going on with the PSU field hockey team. But sometimes, I see Icers getting shouted out by Olympic gold medal gymnasts. Well done boys.

Then again, once in a while, I find something like this. Not unexpectedly, Mr. Heck is a North Dakota loyalist - more or less the one school that hasn't been all "hey, welcome to the club" and seems to hate us for some unexplained reason.

Are we finally close to the end of all of this? Bowling Green dropped the idea of starting their own conference with some Atlantic Hockey schools and Buffalo and has accepted their standing WCHA invitation. Notre Dame has officially announced for Hockey East. So, in 2013, we have...

There's a pretty logical conclusion to all of this (which of course means it will play out some other way). Hockey East poaches from the ECAC (many think RPI) to get to 12. The ECAC then hits Atlantic Hockey (many think RIT) to get back to 12 themselves. Atlantic Hockey and the WCHA get stuck with odd numbers as the two weakest conferences. But that's not entirely a bad thing, because it leaves the door open for the two x-factors to grab an open slot in those conferences. Unless UAH gets an invite to one, which unfortunately doesn't seem all that likely.

At the risk of linking something redundant with what I just said, this one had to go in for its mention of...wait for it...Rhode Island (!) as a potential Hockey East team (they admit it's not a realistic scenario, but still).

How Notre Dame Won Realignment
(The United States of Hockey)

Of course, Notre Dame joining Hockey East ended up as almost secondary news at its own press conference to this: NBC Sports will be broadcasting ND home games starting in 2013. That's how the Irish are declared winners here, a conclusion with which I don't fully agree, in part because I think the Big Ten Network's digital platform (which, if it's anything like basketball, will include all member teams' games not on TV...even the away ones) is being sold short. NBC Sports will undoubtedly develop that end of things in time, but they haven't as of yet. Notre Dame won big without a doubt. But I think the Big Ten schools won just as big.

Really though, I think we need to go a couple years deep before we can accurately identify winners and losers. The NCHC looks pretty bad at the moment, but they may come off as geniuses if Notre Dame's better-than-everyone-else-in-the-conference deal ends up being a giant wedge, a la Texas and the Big 12 in those other college sports. The luster will come off of the golden dome pretty quickly if nobody watches (a legitimate question to ask: is Notre Dame or Notre Dame football the true "national brand?"). However, until the NCHC produces their own major TV deal, they'll have to answer the following question: what, exactly, was the point of your conference?

Speaking of conference realignment, here's a nice look at our women's conference - including where it's been, where it is now, and where it might be going in the future.
Posted by Kyle Rossi at 1:28 AM