It's been a pretty fantastic couple of days for Penn State hockey. Wednesday was Media Day, which led to an AP story that got picked up all over the country. The Icers reached a broadcast agreement with State College radio station 3WZ, announced yesterday. PSU's only Heisman Trophy winner, John Cappelletti, will drop the puck at the Ice Pavilion tonight to officially open the season. And of course, there's the game itself, which is sure to leave people with a good feeling. Even the much-maligned (by me, anyway) sports information department has seemed to pull it together in the last couple days.

Add one more thing to the list: the 2012 commitment of Penticton Vees forward Curtis Loik, as reported by the Vees' official site.

Loik's Vees team is absolutely stacked with college commitments, 11 in all, with Minnesota, Notre Dame, Quinnipiac, St. Cloud State and Nebraska-Omaha all represented. Most recently (other than Loik) and most publicized of these was 2011 Minnesota Wild second-rounder Mario Lucia's pledge to the Irish over the team his father (Don, Minnesota) coaches. So it really shouldn't be a surprise that the Vees are off to a 4-1-0 start this year, trailing only Luke Juha's unbeaten Vernon Vipers in the BCHL's Interior Conference standings. Both of Loik's points so far came in a 9-2 romp over Prince George on September 30th.

Last season, Penticton finished second in the Interior Conference (again to eventual RBC Cup runner-up Vernon) with a 38-17-5 record and advanced to the second round of the BCHL playoffs before falling to Salmon Arm. Loik scored one of the Vees' four short-handed goals last season (described as a "jaw-dropping rocket") and added two game-winners among his ten total - and following some adjustment to the higher level, the right-handed shot made great strides over the second half of the season. In case you're wondering, he also won the team's academic award last season.

He exploded on to radars in his final season of major midget, when his abilities - third in league scoring - helped the Giants to a BCMML championship. Loik put up 11 playoff points in five games, and earned a league all-star nod from BC Hockey. He was, as one might expect on the back of that, on the protected list of the WHL's Vancouver Giants. Loik even had an interview scheduled with the Giants to discuss playing there, but fortunately for Penn State, he elected to move on to Penticton, which maintains his college eligibility (he also cited the Vees' winning tradition and family atmosphere as reasons for going there).

Quickie scouting report? Loik himself can provide that.


"I am a big power forward [that] goes to the net, finishes up close, has skill, [a] playmaker."

So can his coach, Fred Harbinson.


"Curtis posses a combination of skill and size that is coveted by teams at all levels."

Including one I can name that will be at the NCAA level when he shows up. Sounds good to me. 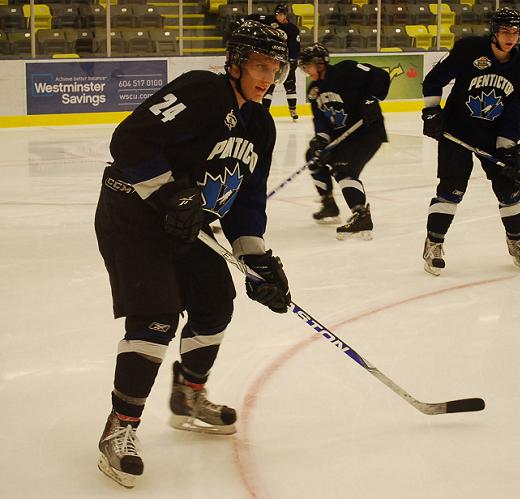