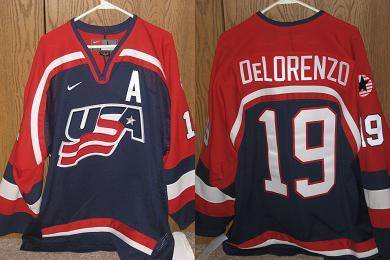 Sticking with the World University Games theme that's been so prevalent here over the last week-plus and in honor of Team USA's quarterfinal tilt with Belarus in a few hours, this week's Payday Memorabilia is a replica of the jersey former Icer Lukas DeLorenzo wore at the 2009 event in Harbin, China.

Before I go any further, I want to offer an unpaid endorsement for IceJerseys, the people who helped me put this together. If you're a true jersey nerd like myself, you'll appreciate the fact that they're also jersey nerds who are insane about details and able to customize more than just current NHL styles. Check them out, you won't regret it.

Basically, my starting point was DeLo's shootout winner against Slovakia in group play, which looked something like this. 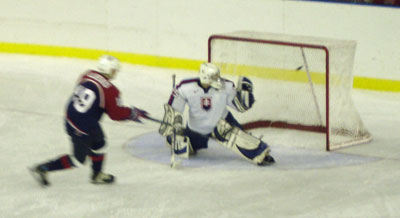 I'd always wanted a Team USA jersey, and figured hey, why not get one of a Penn Stater who was part of a big moment in an international competition? So I scoured the internet for pictures, but unfortunately had little luck beyond this USA Hockey photo gallery. Among the best pictures from that:


From these, I concluded that the team was wearing jerseys modeled after the old Nikes worn by the silver-medal winning US team at the 2002 Olympics, and in a few other competitions from that era. Next stop: eBay, to find someone selling a blank one of those in 2009, which I found for about $15 after a couple months. After that, it was off to the post office to mail it to the Montreal area with instructions to "do it like the 2002 Olympic team." A few weeks later it came back as you see it at the top of the post, complete with DeLorenzo's No. 19 that he wore in the WUG and the A on the front, as he was an alternate captain on the team as well.

PS. If you're another jersey nerd reading this, I know it's not a perfect match. For starters, the WUG team wasn't wearing Nikes, just K1s meant to look like Nikes. Which of course means no swoosh on the front for the WUG version, and no star shoulder patches. Also, the numbers on the WUG jerseys, to me, look to be a little thicker and cut slightly differently. But until you can do it better based on the information available, don't hate.
Posted by Kyle Rossi at 7:14 AM