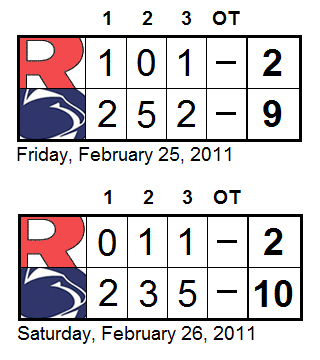 
I foresee a whole bunch of taking anything good that happens against Rutgers next weekend and guessing whether it would've happened against Rhode Island.

Given the distinct lack of big-picture meaning to these games, let's start there. Two basic ways to look at it.
As you can probably tell from the more rational tone I gave the second point of view, I still kind of lean that way in spite of the two thrashings the Icers gave them. Please don't take this to mean that I'm calling them the 2002 Red Wings, but they are on par with teams PSU has struggled with this year, yet the Icers obviously didn't this weekend.


(Over)simplified way to look at it: outside of Rutgers, the Icers have played 14 games against teams ranked from 15th through 31st in the most recent poll (including six against West Chester and Pitt, who are below Rutgers). In those games, PSU is 12-2-0 and averaging 5.64 goals per game while giving up an even 3.00. Rutgers is 26th in the poll, and we averaged 9.50 goals for, 2.00 goals against. Basically, PSU beat Rutgers worse than other teams similarly rated by the coaches.

Faulty reasoning? You may think so. But either way, I'm going to feel good this week, and you should too. Let's get into the reasons why - lots of credit to go around.

In a weekend of milestones like Tim O'Brien's becoming the 15th Icer ever with 200 points and marking the last home games of him and the other seniors, it was the so-called fourth line of Chris Pronchik (1 goal, 5 assists), Joe Zitarelli (2, 4) and Mike Broccolo (2, 2) that stole the show. Picking a favorite one of their goals is a little like picking a favorite jersey, but if I have to, I'll go with 5:43 of the second Friday. After a dump-in, all three gave the Rutgers D zero room to breathe and did a great job maintaining the zone - this is an effort goal. The eventual payoff came when Zitarelli won a battle behind the net with three Scarlet Knights converging, got the puck to Pronchik out front, who quickly moved it to all-alone Broccolo.

It feels like crediting the bottom six has become kind of a cliche in my write-ups, but hey, the shoe fits. Whatever problems may exist with the team, forward depth is not one of them. I thought the other half of the bottom six (Taylor Cera, Nick Seravalli and George Saad) had a pretty good, although overshadowed, weekend themselves.

Another possible cliche: saying nice things about the Carey Bell-Brian Dolan defense pairing, although I'm going to go about it a little differently this time. Rutgers' first goal Friday was not a shining moment for either of them. Bell got caught on a bad pinch, and Dolan, back by himself, fell trying to defend goal scorer John Beatrice. But each of them dusted themselves off like champs, and in fact, each had the chance to double their season goal output after that. Dolan's in particular was a beauty, because it came less than a period later and involved him driving the net, which of course involves a degree of risk assessment if you're a defenseman. Nicely done.

Speaking of defensemen, a nod to Dan Loucks is in order. The power play was 3-for-11 on the weekend (hey, we've done worse about other bad PK units), and he was a big reason why. I like the way he managed the point, and he seems to have a pretty heavy shot that he keeps low.

Chris Cerutti had a great weekend including a hat trick Friday, and doesn't get a mention until now. Ouch. He and his centerman (O'Brien) will obviously go a long way in deciding how the Icers fare next weekend.

Finally, how about senior goaltenders Teddy Hume and John Jay? Both were great in their likely last starts at Penn State. You can play the "easy win" card if you want, but it would mean that you didn't watch Jay's save with about 8:57 left in the first period Friday, or Hume's with 1:46 left in the first and 4:27 left in the third Saturday. Hume showed the form that got him to third on the all-time Icers wins list, and Jay made you wonder why he didn't get more of a look this year with some of the goaltending uncertainty.

Actually, that's not finally. Finally is once again offering my sincerest thank you to Steve and Barb Penstone for their work on the UStream broadcasts, as Saturday's was this season's last. Believe me, I've often considered the alternate reality where they don't exist. I probably don't even start TYT without the ability to watch the games, and I probably get frustrated and quit with a poor production (or one you have to pay for - twice if you need to re-watch it). Even if I do give it a go under those circumstances, it wouldn't be nearly as good, for obvious reasons. Great work this season, hope to say hi in Delaware!
Posted by Kyle Rossi at 11:05 AM