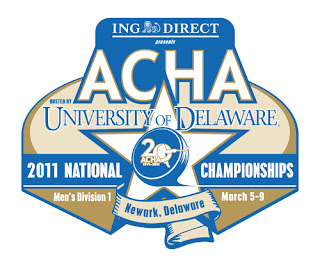 Time for the final edition of this feature, in light of the tournament cut-off rankings coming this week. Hopefully it's the last for quite a while - I would prefer to not use it next year, for obvious reasons.

Just to review, I've already deemed Lindenwood, Davenport, Ohio, Delaware, Adrian, Rhode Island, Minot State and Arizona State (the teams ranked 1 through 8 in the last poll) locks to make the tournament. Lindenwood and Delaware, in fact, are in already, thanks to the CSCHL autobid and the host autobid, respectively.

Stony Brook (ECHA), Canton (ECHL), Slippery Rock (CMHA) and Rutgers (NECHL) have also earned autobids. These four will almost certainly be the 13th through 16th seeds in Delaware, as they are ranked outside of the top 16 at present.

What's left? Six teams for four spots. Let's take one more look, with a final verdict for each.

The Sooners didn't do themselves any favors by getting swept on the Big Pond, however in my opinion, Oklahoma was playing with house money - there's no way they drop below Oakland, not with just having swept them a week ago.

I'm really not sure what to make of the Grizzlies. Tough schedule, yes, but 1-3-1 since the last ranking is hard to ignore. I'll go out on a little bit of a limb here and say that OU pays the price for being the least consistent of these teams down the stretch.

I've already aired my grievances with the Icers, so I'll just say that we're extremely fortunate that tripping against RMU won't cost us anything more than a spot or two in the final seeding.

I won't lie, I'm slightly miffed at the fact that the Cyclones are even under consideration with sixteen losses. The primary things they have going for them at this point: their two wins against RMU (IL) in early January and Al Murdoch's status within the ACHA. They don't deserve it, but I really can't imagine it otherwise.

The Eagles followed up their attention-grabbing split at Ohio with the more-expected pair of blowouts against John Carroll. As mentioned, they'll have a tough time jumping Iowa State, but if Oakland takes the hit I just predicted, they won't have to.

There's still a shot here, believe it or not, it all just depends on the voters. If two of Oklahoma, Oakland and Iowa State take a massive tumble, the Illini could still sneak in the back door. I'm just not seeing it though.

Verdict: Out
Posted by Kyle Rossi at 8:35 PM