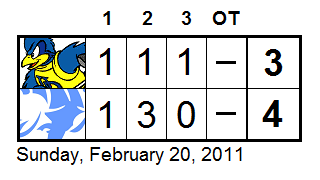 For the second straight day, Rhode Island used a huge second period to survive a late rally - except this time for the ESCHL playoff championship and with formidable Delaware on the opposite bench.

The Blue Hens struck first when Jason Michaud capitalized on an Alan Dionne turnover from just underneath the top of the circle 2:40 into the game. Robert Beggi answered 14:04 later, finishing a nice passing play with Devin Sheehan and Jay Dupras, to close the first period at 1-1.

Rhody's second period barrage came from David Macalino, Dionne (on a 5-on-3) and tournament MVP Shawn Tingley. Ryan McDonald stopped the bleeding with five minutes left in the second at the end of a textbook breakout, and Kevin Miller pulled UD within one early in the third, but the Blue Hens would get no closer despite controlling play for much of the late second and third periods.

While the Icers did not participate in the final - snapping PSU's run of ESCHL playoff titles at three - George Saad, Tim O'Brien and Matt Madrazo all received honors in the postgame ceremony. O'Brien was named first-team all-ESCHL, Madrazo was second-team all-tournament and Saad won the conference's Sportsmanship Award. Congratulations to the three of them, as well as to URI for adding the playoff championship to the already-won regular season crown. See you guys in Newark in two Saturdays...