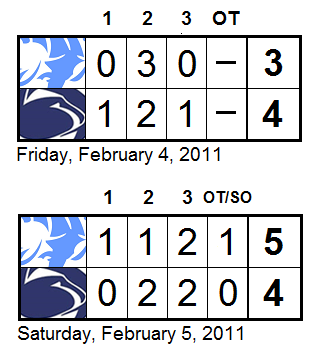 Right off the top, I think you have to give the entire team all the credit in the world for scaling the mountain that was in front of them circa January 9th. Then, Ohio had just finished pasting the Icers at Bird Arena in a pair of games during which Penn State looked - no other way to put it - completely awful, and not at all like a team that wanted or deserved to go to the ACHA national tournament. Now, the outlook is pretty close to the opposite of that - six wins in the eight games since then, including 2-1-1 in the last two weekends against two of the ACHA's best teams, a lot of that coming without some key personnel.

There are some doses of reality to go around - URI was gashed worse than we were by the World University Games and we were generally outplayed (badly at times) over the last four games, for starters - but this, on balance, has to be a positive weekend. The Icers are now two home games against a bad Robert Morris team from a trip to nationals, and we've shown that we're at least more capable of competing at a high level than we looked one month ago.

A lot of that positivity comes from the way unheralded players have filled in effectively. It's almost become boring at this point with the way it's happened with such regularity. The latest example is freshman Andrew Duval, in the lineup because of an injury to Michael Longo, himself a guy that had been effective in a larger role. Duval followed in the underclassman hero footsteps of Mike Broccolo last week and Mike McDonagh the week before by scoring the winning goal Friday. On that one, George Saad did a tremendous job keeping the play alive in the corner. The puck ended up on Rich O'Brien's stick, and he had a shooting lane, largely because of Saad's drawing the coverage in. O'Brien's blast pinballed off a man and a heads-up Duval found the loose puck and buried the decider, which also happened to be his first at Penn State.

How good have McDonagh, Broccolo and Duval been? Well, let's put it this way: McDonagh made our power play not suck (which takes some doing), at least temporarily, on Saturday when he and Marek Polidor crashed on Dan Loucks point shot, and the captain allowed the freshman to do the honors. He added two assists in that game as well as one on Friday, and has generally looked fantastic playing on a top line with Dom Morrone and Paul Daley.

Taking out Robert Morris, who can't brush their teeth without giving up five goals in the process, the Icers are just 4-of-34 (11.8 percent) with the man advantage in 2011. It's definitely a concern, keeping in mind that in close-to-the-vest tournament hockey, special teams are vital. However, I'm willing to see how it looks in possible rematches with both Rhode Island and Delaware at ESCHLs in a couple weeks with Tim O'Brien once again manning the point and Eric Steinour giving us size down low. Their absence might have been felt there more than anywhere else.
﻿﻿
﻿
﻿Speaking of the ESCHL, apparently Saturday's shootout loss eliminated the Icers from ESCHL regular season title contention and clinched said title for the Rams. I have to admit that I have a hard time caring all that much. Other than the guaranteed scheduling (which is huge, I understand that) and unless you need an autobid, conferences are completely pointless in ACHA Division 1. Maybe it's a product of my coming up during the independent years, but nationals are the one and only season measuring stick to me. I've heard stories about the wars in the old ICHL, a conference where winning the tournament was important enough to actually decline a nationals bid. However, this is not that, and I think most who have seen both will agree with me.

Getting back to the games, I've been hard on the defense at times. So to be fair, I'm going to list some of the great plays they made during a crucial early penalty kill of Joe Zitarelli's checking from behind major in Friday's game. Any time there's a five-minute power play, there's one certainty: either way, a momentum swing is coming. These guys helped make sure that swing went PSU's way, and the payoff was the game's first goal 3:24 after it ended. Times given from this point are time remaining in the period (the penalty ran from 13:04 through 8:04).
Not bad, eh? I like how it involves almost every d-man who dressed too.

Another guy of whom I was critical last week - Morrone, and yes, he still deserved it - offered much in the way of redemption this week as well, as he was the only Penn Stater with multiple goals on the weekend. He opened the scoring Friday after that five-minute PK. The goal started when McDonagh won a battle on the boards and got the puck to Petrick, whose nifty pass sprung Morrone. The sophomore from Sewell, NJ then used Daley as a decoy on the 2-on-1 and beat Andrew Marks cleanly. Then with 4:18 left in regulation on Saturday and Penn State trailing by one, Daley got the puck down ice, where Morrone was one-on-one. No. 19 simply wanted the puck more than URI defenseman Brandon Pinheiro. A prone Pinheiro, loser of the puck battle, could then only watch as Morrone put Paul Kenny's jock in the rafters, as Jeremy Roenick once put it.

While the shootout didn't go the Icers' way, the fact that it came to that means that PSU, for all intents and purposes, "won" alumni weekend. And regardless of who Rhody was missing, that's nothing to brush aside.

Next up: Robert Morris (yes, again). But you're excused if you breathe a sigh of relief first.
Posted by Kyle Rossi at 1:43 AM