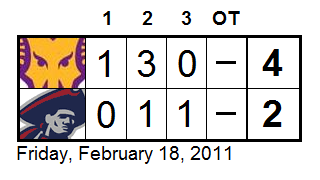 The West Chester Golden Rams stormed out to a 4-0 lead late in the second, and the goaltending of Randy Japchen ensured that it was enough in a chippy 4-2 win over Robert Morris in the first round of the ESCHL tournament at the University of Rhode Island's Brad Boss Arena Friday night.

Japchen stopped 36 of 38 shots and was particularly effective early on, after WCU took a 1-0 lead 50 seconds into the game when Michael Kozza created a neutral zone turnover and finished the breakaway chance he started. The Colonials dominated play for stretches after that, carrying into the second period, and it looked for quite a while like the narrow lead might be short-lived.

However, three Golden Rams shots beat Robbie Fallick in the second period to put the game out of reach. First, Steve Meade skated down the right wing and scored from the circle early. Chris Doyle then slammed home a rebound a few minutes later, and Steve Meade deflected Gordon Nicholson's feed in to make it 4-0 with 33.5 seconds left in the period.

RMU made a game comeback bid, scoring just 13 seconds later when the ubiquitous Bryan Chiavetta found Luke Bennett on a transition goal, and Bennett scored a second goal on the power play 4:00 into the third. But it went no further, thanks to both Japchen and fatigue, as the fact that the Colonials only play two lines seemed to catch up with them as the game wore on.


Here's the remaining schedule for the ESCHL tournament.