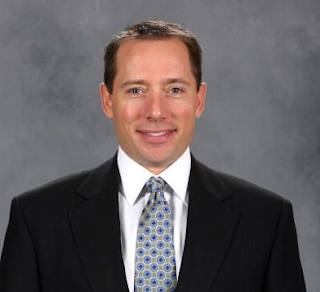 After my last post HCC post on Mike Kemp, I hit a wall of sorts. At this point, I've more or less addressed all of the "obvious" candidates - the ones who have popped up in speculation even more baseless than what I do (let's keep that front and center - I've had inside information roughly twice in my life), the ones who have experience starting a program, et cetera. Plus, I feel like I've hit most current NCAA coaches on that pretty thin line between "set for life at a top program" and "not good enough for my taste."

So how do we get from here to the inevitable end of this series? By scouring NCAA assistants, NHL assistants and junior coaches for additional candidates. College experience (playing or coaching), upward career trajectory and some reasonable measure of success are musts.

It was one such search that led me to Greg Carvel, an Ottawa Senators assistant since 2004.


At St. Lawrence, Greg was a Phi Beta Kappa scholar, ATO brother, a captain of Saints hockey, and an Academic All-American hockey player. In four seasons at St. Lawrence from 1989-90 to 1992-93, he recorded 124 points (37-87) and 87 penalty minutes in 124 games, and was voted to the ECAC all-rookie team and named best defensive forward in 1992-93. He was a government major who also minored in math.

Academic emphasis? Check. Now, to be fair, I can't pull grad rates from that imaginary college program where he was a head coach, but the guy has a master's degree (in sports management, from UMass in 1996) in addition to everything listed above, so he gets the benefit of the doubt. Plus, I've always had kind of a soft spot for St. Lawrence, ever since they narrowly escaped Wayne State 3-2 in 1999-2000 - the same season the Icers defeated the now-defunct Warriors 5-2 - then advanced to the Frozen Four.

Since this is a college hockey blog, let's throw his full stats in, just to be thorough.

During those last two seasons, Carvel was property of the Pittsburgh Penguins, as he was selected by the Pens in the long-gone NHL Supplemental Draft in 1991. He never did play in the NHL though, instead spending a year in the Swedish first division with Ostervala.

Carvel seamlessly moved back across the pond and into a suit, first as an assistant coach and assistant athletic director at Canterbury School in New Milford, CT, then as an assistant coach at Amherst College. This early foray into hockey operations was successful enough for Carvel to get a job as Director of Hockey Operations for the AHL's Lowell Lock Monsters in 1997. Keep in mind that he's 27 at this point and holding down an important position in the second-best league in North America. Oh, and he helped start that particular AHL franchise, which was in the playoffs in year one. Pretty impressive.

The then-Mighty Ducks of Anaheim agreed, making Carvel their scouting coordinator in 1999 and adding the responsibilities of a video coach in 2002. Anaheim's draft picks during Carvel's run in scouting include Jordan Leopold (a month after he was hired, assign credit as appropriate), Ilya Bryzgalov, Martin Gerber (in the eighth round, not bad for a serviceable goalie), Joffrey Lupul, and most significantly, franchise cornerstones Ryan Getzlaf and Corey Perry. Thanks to some good drafting and other shrewd personnel moves (getting Jean-Sebastien Giguere for a second-round pick in 2000, to name one), the Mighty Ducks went from a team that had one playoff series victory in their entire history to getting within one game of the Stanley Cup in 2003.

Carvel parlayed this success into another promotion, this time to full assistant coach in 2003-2004. However, that only lasted one season, before new Ottawa head coach Bryan Murray (formerly general manager of the Ducks) hired him away. Leaving proved to be a smart decision, as a contract dispute between the Ducks and head coach Mike Babcock during the 2004-2005 NHL lockout brought turnover to Anaheim's coaching staff.


The run with the Senators has been kind of a mixed bag, to say the least. Let's put it all out there - record, division standing, playoff finish.

This season, after that brief resurgence, Ottawa has bottomed out to 19-31-9 at the moment, and is in full-on rebuild mode, including the recent trades of Mike Fisher (better known as Mr. Carrie Underwood) and Brian Elliott.

So what happened? One popular explanation is that superstars Daniel Alfredsson, Jason Spezza and Dany Heatley, who fueled the Sens rise to the top of the Eastern Conference, became too expensive relative to the salary cap, and the supporting cast suffered, causing that first dip after the trip to the finals. That situation was corrected with the trade of the disgruntled Heatley just before the 2009-2010 season, and Ottawa bounced back. This has been sort of a lost season, where everything from the suicide of assistant coach Luke Richardson's daughter to an injury to Spezza has helped derail the season. To be honest though, it's pretty hard to point to a single problem (or three or four) when the team is 29th in the league (of 30) in goals for and 28th in goals against.

Regardless, it seems as if Carvel has avoided most of the blame, at least to this point. He's survived through the coaching regimes of Murray, John Paddock, Murray again, Craig Hartsburg and current head man Cory Clouston (in Anaheim, he went through Hartsburg, Guy Charron and Murray before Babcock). Well, to be fair, he's avoided blame from his bosses. Maybe not from Sens fans (link rated R).

So what's his coaching philosophy? Straight from Carvel:


"Playing for [Joe Marsh at St. Lawrence] and being team captain were most instrumental in preparing me for this profession. [Marsh] was a players' coach who coached with emotion and cared for his players and their development as athletes, students and young men. Serving as captain during my senior year helped me discover leadership skills that have allowed me to be successful as a hockey coach at the highest level."

In the final analysis, there's a lot to like here - NHL credibility, but with the likely educational emphasis it's often assumed that pro coaches lack. An extremely diverse background for his age that includes connections in hockey-rich New York, Massachusetts and Connecticut. If the issues surrounding the Ottawa Senators' struggles since 2007 can be explained by non-Carvellian factors, the only other drawback to his candidacy is that he has zero experience as a head coach. Anywhere, at any level. But hey, everyone has to do it for a first time at some point, and if the guy can coach, the guy can coach. If he's Ottawa Junior Canadiens-era Scotty Bowman, I'm going to be okay with that.
Posted by Kyle Rossi at 8:51 AM