Rhode Island (now No. 6 and 25-3-1) actually had another game the day after laying waste to the Icers back in November - against NCAA Division III doormat (okay, it's a second-year program, but still) University of New England. The Rams jumped out to a 3-0 lead in that one, then hung on for a 4-3 win. Here's a copy/paste of quotes from URI's newspaper, The Good 5-Cent Cigar. Despite the creativity on the name, the paper makes me extremely grateful that I don't blog about URI. Thanks for not sucking, Collegian.

Rhody won with no additional goals as [Matt] DeJulio made 14 stops in the final period to help seal the win for the Rams.

"We used all 32 of our guys this weekend, seeing what they can bring to the table," [coach Joe] Augustine said. "All in all it was a good weekend."

Four of the next six, spanning the holiday break, were against West Chester, with the other two against Robert Morris. These games were Exhibit A in the Rams' tendency to look like the best team in the ACHA one day, then play down to competition the next.

Of course, they can also play up to competition, as Delaware found in a showdown for first place in the ESCHL the weekend after those last two lackluster games against WCU. Since the Rhody media more or less ignored the big weekend (maybe they were still on break, if so, I picked the wrong school), I'll go to the Delaware side of the story. UD held a lead on Friday until...


The delay [for a broken panel of glass] certainly seemed to slow down the Blue Hens, as URI was able to knot the score at 3 by the end of 2. After an evenly contested opening ten minutes of the final frame, URI eventually squeaked one by Broadt again for a 4-3 lead with just over 9 minutes to play. The third period turned out to be the worst of the season for Delaware as they surrendered two more goals, including an empty netter to seal the game 6-3 in favor of the Rams.

The Saturday game was knotted at 2-2 going into overtime, then...


After an icing call forced tired UD skaters back into their defensive zone with under two minutes gone in the extra session, coach MF Schurman called timeout to get fresh legs out for the critical draw. The UD center was ultimately beat clean leading to hard one timer from the weakside URI point that bounced off the crossbar and right onto a URI stick for an empty net rebound goal.

Sweeping the Hens placed the Rams in the ESCHL driver's seat as four key players departed for the World University Games. These players include Alan Dionne and Dan Lassik, one of the best defense tandems in the ACHA, as well as Krannich and Devin Sheehan, two of URI's many talented forwards. Head coach Augustine is not on the WUG staff, as he has been in the past. Which is probably fortunate for Rhode Island, otherwise the team would be in the hands of these guys. 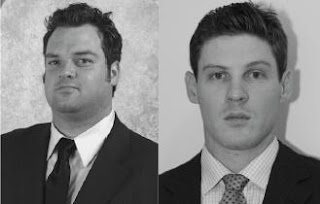 Even with Augustine behind the bench, Rhody has sort of limped along for a couple weeks against weaker competition, although they have gone 4-0-0. Ho-hum 6-2 and 6-1 wins at Cortland were followed by 4-3 and 5-3 home wins against No. 17 Stony Brook last weekend that were even tougher than the scores indicate.


Rhody took a 3-1 lead into the third period in Friday's game but was unable to keep Stony Brook from tying the game later...Freshman center Sean O'Neil scored the game-winning goal with 4:20 left in the game.
********************
Stony Brook scored two goals in the tail end of the second period [Saturday] before taking the lead early in the third period.

"The second one [goalie Paul Kenny] had no chance because that was a heck of a shot," Augustine said. "The third goal was a 2-on-1 and is the easiest goal that kid will ever score because it was misplayed by our defenseman, but I thought our goaltenders over the weekend played very well."

After several scoring chances went unconverted, [Jay] Dupras scored the tying goal off a setup pass from [Shawn] Tingley with 4:19 remaining in the third period.

On a similar play just more than three minutes later, Dupras scored on another play setup by Tingley to give Rhody the lead with 1:13 remaining.

This weekend, of course, is alumni weekend at Penn State. Terry Pegula will be there, fresh off of finalizing his agreement to purchase the Buffalo Sabres this week. A new class will be inducted into the Icers Hall of Fame. The assembled dignitaries will be treated to two pretty important games in terms of the ESCHL standings and national polls. But maybe the best news of all for the the Icers and their fans is that after last weekend, the pressure's off a little - not entirely, but just a bit. Penn State is depleted by injuries (Taylor Cera, Kevin Miller and now Michael Longo) and the WUG (Tim O'Brien and Eric Steinour), but gets to face an inconsistent team that's just as shorthanded. And since a split more or less locks up a nationals bid, I'm pretty confident that I'll be booking a hotel room next week.

Steve Penstone's VFTB was back on the interview trail this week, treating us to personal favorite Dan Petrick and Mike Broccolo, one of last weekends heroes. And if you want to relive last Saturday's big win, he has it broken down into six convenient minutes (well, 5:54).

Here's an AP story about Big Ten hockey that made the rounds this week. I can't really call any of it new information, but it popped up on enough websites to get me to break down and link it here anyway.

I'm not one who normally believes in statistical anomalies as evidence of anything, but a Collegian piece this week laid out a convincing argument to the contrary for the Icers' third period success.
Posted by Kyle Rossi at 1:23 AM