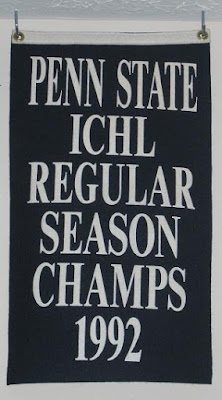 The ESCHL tournament gets underway tomorrow, but today, we're going back in Icers history to their conference home from 1984-1992. Of course, I'm speaking of the International Collegiate Hockey League (ICHL), also affectionately known as the "Iron League" after the league the Hanson Brothers supposedly came from in Slap Shot. You can probably deduce the intensity level of the games against teams like Buffalo, Buffalo State and Erie CC from this moniker. The "I" part of the conference's name, in actuality, came from Niagara College in Welland, ON and Conestoga College in Kitchener, ON.

Penn State plowed through this conference with a 14-1-1 record - the best ever in ICHL regular-season play - to earn the title in 1991-1992. The clincher took place against Erie on February 8th, a 6-1 decision that was satisfying on many levels.


[The Icers avenged] several disappointments in recent years. Penn State had lost last year's regular season title to Erie by a point. They had also lost, 7-6, in overtime to the Kats this season on Jan. 4. In that game, Coach Joe Battista was upset with several marginal calls that went Erie's way.

The tie in that record was against Niagara exactly one week after the loss to Erie, so that 2-1-1 record over two weekends was the closest thing to adversity Penn State faced during the regular season ICHL schedule. With the top seed in hand for the conference tournament, fifth-place Buffalo State (5-11-0) was the opponent, but things didn't go quite as well there.


The result was a 5-4 controversial loss for Penn State that ended its hopes of leaving the league with a championship. The team will be leaving the ICHL to join another league next season. Icer Coach Joe Battista also failed in his quest to become the first ICHL Coach of the Year to win a ICHL Championship in the same year.

Why "controversial?" The Icers trailed 5-4 in the waning seconds of the game, then...


Dave Murphy scored what appeared to be the game-tying goal with one second remaining. The ensuing celebration was stifled when the referee waved off the score, ruling that the net was dislodged before the shot went into the net.

After an seemingly endless debate involving referees, coaches and players, it was ruled that the net was intentionally knocked off by a Buffalo State defenseman. In the National Hockey League, such an infraction would result in a goal for the scoring team. But not in the college game.

"Knowing the rules, you have got to give the defenseman credit," Battista said. "He did what he had to do to win. I don't teach my players to win that way."

And of course, why would it be controversial if the penalty shot was successful?


[Andy] McLaughlin took the puck at center ice, skated to his right. He reversed his direction, cut across mid-ice and attempted to juke the goalie with a backhand shot to the left side of the net. Economou never bit, and the puck died amidst his pads. The red light never flashed. No goal. The Bengals' celebration begun.

One unusual quirk of those days: this season-ending game took place after Penn State had already finished third at the first national championship tournament under the ACHA banner (incidentally, this was also the only time PSU hosted nationals). This odd timing led to situations like 1989, when the Icers skipped nationals to focus on the ICHL tournament - can you imagine that happening today? The tactic proved successful, as PSU won their only other ICHL title, this one of the tournament variety, on home ice against Buffalo 8-6 after twice overcoming two-goal deficits in front of a raucous, standing-room-only crowd.

So what of the actual banner? Well, there's a reason I waited until the end to talk about it. I assume they were given to members of the team or something. I have no idea though. A bunch of years later, someone found a box of them somewhere, and they sold them at a game. I bought one. It measures about 9.5" x 17.5" and is made of a felt-like material that may actually be felt for all I know about fabric. Riveting stuff there.
Posted by Kyle Rossi at 8:38 AM