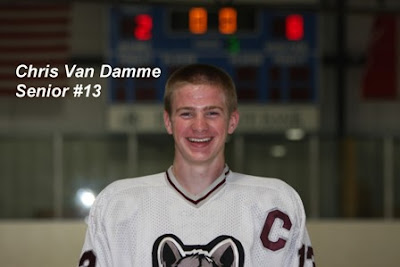 Unless you're a fan of Niagara's program (I am, they're first-rate), recruiting is not generally something that's talked about in the ACHA. Whether that's due to lack of interest, lack of visibility, lack of media (which I suppose relates to lack of interest), lack of some of this stuff, all of the above, something else, whatever, I'm not sure. In the day, Icers recruiting news consisted of Joe Battista showing up at an early-year HMA meeting and listing players who would be joining the team that season. If we were lucky. And even then, unless you're a hardcore follower of Tier III junior hockey, those guys where just names scribbled on one of those Penn State hockey notepads to you.

Today, things aren't really that much different except when I get a stroke of freak luck, even with my being able to order pizza on my phone. Oh wait, I meant using the internet parts of my phone, not the calling people parts of my phone. Never mind.


Van Damme might have had a little more adjusting [than the other guy talked about in the linked article] because of the size discrepancy when he was a 5-0, 110-pound freshman. Still, with his speed he was able to score 29 points that season in Metro Central Division games.

Prairie Ridge coach Rick Rewiako is uncertain of the school record, but Van Damme has more than 220 career points, and that is only counting Metro Central games his freshman and sophomore seasons. The past two years, against an independent schedule that is more challenging, Van Damme has 62 and 66 points.

“Speed’s one of my main assets,” Van Damme said. “If I don’t have the puck, the speed is just as important to get it back or get open. I think I’ve improved mainly with controlling the puck and seeing the ice better. I feel like I’m more aware.”

Wolves coach Rick Rewiako said Van Damme served as a role model to other players in the program.

“He never missed a dry-land workout and didn’t miss a practice,” Rewiako said. “As a freshman, he was one of the smallest kids in the league, but he got in the gym and built himself up. The level of competition he brings every night is the best I’ve seen in our program.”

Van Damme and three other seniors, Andrew Sprouse, Mike Kurek and goalie Ryan Fichuk, are trying to take the Wolves for a deep [Amateur Hockey Association of Illinois] tournament run. Van Damme is the only one of the four to play four varsity seasons.

“He’s hard to hit because he’s so shifty,” Rewiako said. “You can’t hit him because he’s fast, shifty and strong.”


I'm actually kind of disappointed, because the kid just played in a tournament out my way. Way to be a couple weeks late on the article, Mr. Stevenson. And place spelling next to economic growth on the list of things Cleveland is bad at.

Anyway, best of luck at AHAIs Chris, hope to see you at Penn State next year!
Posted by Kyle Rossi at 10:04 AM