Who Own the Sabres? 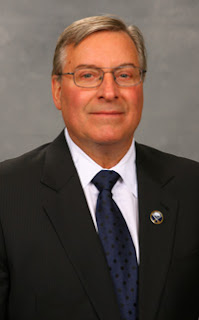 The guy pictured to the right. No, really, I'm serious this time. After a drawn-out process that took nearly three months from initial rumor to press conference, Terry Pegula was formally introduced today as the new guy in charge of the forty-year-old franchise.

I'll pass most of this post off to the letter from Pegula posted on the Sabres' website, but as someone who watched today's press conference... wow. I can't articulate this well enough to do it justice, but Pegula is a man whose passion for the game exceeds even his rather large bank account. That's not new information for Penn Staters, but it was reinforced in spades today. He got choked up while calling Sabres legend Gilbert Perreault his hero, and discussed the lengths he went through to pick up choppy radio broadcasts of games. He promised the City of Buffalo Stanley Cups, with an s. He made it clear that no expense will be spared in winning those Cups ("if I want to make money, I'll drill a gas well," he quipped at one point). He even found a way to work in a Joe Battista name drop, which always plays with me. You can watch all of that for yourself right here.

You have a great one, Sabres fans. Be excited.

It is my pleasure to introduce myself to the great fans of the Buffalo Sabres and the entire Western New York community. On behalf of my entire family, I want to let you know that we are extremely excited to become a part of the rich history and tradition of the Sabres.

From 1980-1998, I was sitting next to you in your seat at both the Memorial Auditorium and HSBC Arena as a season ticket holder. As a longtime Sabres fan, I have followed all of the great players that have represented our city. Along with each player and fan, we have all shared one vision...to have the Buffalo Sabres name inscribed on the Stanley Cup. I am committed to bringing that long awaited championship to the Sabres and the best fans in the National Hockey League.

We are also committed to enhancing our fan experience at HSBC Arena. For over four decades, our fans have embraced the team and have worn our team colors with pride. It is my goal to continue to provide our community with a reason to cheer and build on the tremendous support that has brought the organization to where it is today.