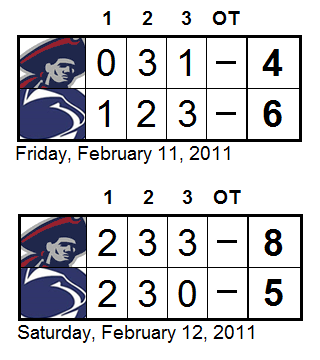 Collegian Fri. summary // Collegian Sat. summary // Collegian weekend recap and sidebar
Onward State weekend recap // Friday VFTB highlights // Saturday VFTB highlights
Friday team press release // Saturday team press release
Friday box score // Saturday box score
Sometimes when the Icers are playing, these posts just snap together in my head. I've identified what I feel are the storylines common to the two games, I know how to connect them, all that's left is to double-check a few plays I've scribbled in my notebook to verify what I saw, and the post is up a few hours after the Saturday game ends. And with a couple minutes left in the second period of yesterday's game, this was feeling like one of those...

We'll get to that in a minute, but first, let's look at where we stood as time wound down in the second. The Icers won Friday night in rather ugly fashion. Which was perfectly fine in my book - those weekends against Delaware and Rhode Island, combined with some struggles by teams near us in the poll, earned us some leeway in the style points department. PSU actually trailed 3-2 with under four left in the second. That lasted until Paul Daley corralled the puck near the blue line on the power play, gave it to Dom Morrone, went hard to the net, and got it back just in time to tie the score against a completely lost Robbie Fallick. Nick Seravalli won two consecutive draws to start that power play (the second immediately preceded the goal), just one piece of what I thought was a good weekend for him.

That goal was important on a number of levels. For starters, it ended yet another power play mini-drought - the Icers finished 1-for-7 Friday, then went 2-for-6 Saturday, so maybe that ship's getting righted. More importantly, it gave PSU momentum for a third period where goals from the two World University Games returnees and Daley (finishing a hat trick) were enough to put the game away.

None of this was all that surprising - Robert Morris had demonstrated the firepower to hang with good teams for two periods before falling apart (see Delaware in December, and PSU in January). The Icers are so good in the third period that they get articles written about it.

These two trends came to a tidy convergence on Friday - and if you had asked me, they were about to again on Saturday after a wild second period that included four goals in the first 5:46. It all started to unravel with an interference call to Daley at 16:32 (Steve Penstone's thoughts on it: "You've gotta be kidding me.") and Kory DuMond banging home a rebound at the end of what had been a mostly harmless power play to that point. Bryan Chiavetta (who had an okay weekend, I suppose) won a battle to foil a clear in the near corner, then was next seen cycling in the opposite corner of the zone, then taking the shot that generated the rebound.

The real backbreaker was the next one though. Following a George Saad turnover and some mass confusion, Luke Bennett found the puck in the high slot and beat Teddy Hume cleanly with just two seconds left. I'll spare you the details of the rest. Suffice it to say that the following period was arguably the Icers worst of the season and that the Colonials finished off a run of five straight goals.

So what went wrong? I'm still not sure, but here are a few possibilities.
Some positives that were obscured by all of this:
The results, however, turned us all back into scoreboard watchers, if only briefly. It all worked out in a way that means the Icers' tournament hopes are probably not in jeopardy - but we will be playing a better team in the first round than we would have otherwise. I'll get more into that tonight or tomorrow with the final Scoreboard Watching feature.
Posted by Kyle Rossi at 12:22 PM