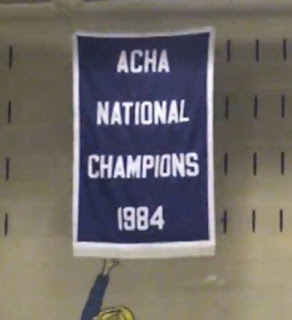 It started innocently enough, with me popping on the USCHO message boards to say a few nice words to a couple Alabama-Huntsville fans (complete with my signature listing PSU's ACHA national championships). Then this bomb was dropped:


Got a question, though: why does your list of PSU national championships include 1984? It was quite a nail biter, but I was there to see UAH emerge victorious that year and win their second consecutive national championship at the club level. Just curious if I'm missing something.

Is it true? Is one of our seven national championships a fraud? Let's examine.

Courtesy of that same USCHO poster, wsp67326, we get the following.


I can assure you, the National Club Hockey Championships were played in Huntsville from 1983 to 1985 with the results I noted earlier. PSU was definitely the runner-up in 1982-83, no question. But, the claims for 1984 and 1985 are, again, without question, incorrect, unless the ACHA was a separate organization in 1984 and 1985 from the tournaments I attended those years.

Actually, all three years, the tournament consisted of six teams, 3 denoted as "northern" teams and the others as "southern." Each team in each group played the other team in each group once to determine a top-ranked team to move on to the national championship game. UAH played against Auburn (yes, Auburn) and Arizona in 1983 in the southern group and easily made it to the final, winning in late fashion against PSU (Bob Quaile scored on a shot that hit the PSU goalie in the chest and agonizingly rolled down his arm into the goal).

In 1984, I don't even remember PSU being in the tournament, but the northern teams were Northern Arizona, Miami, and, I think, Ferris State (UAH played against Indiana and Ohio and rolled into the final with an incredible game against the Redskins, at the time, a team they had lost to twice to begin that season; they were behind the entire game 1-0, until a huge third period to win 3-1; for some reason the UAH site incorrectly lists the final game against Ohio; I assure you that is incorrect).

Another poster, tnlong, adds the pairings from the 1984 tournament and also offers a picture of this program cover as evidence. Pretty damning.


So what's going on here? The answer's actually quite simple. Club hockey was very loosely regulated in those days, to the point where there were two competing national championship tournaments for several years in the early and middle 1980s - the US National Collegiate Club Hockey Championships discussed above and the National Invitation Tournament. PSU competed in the former in 1983, then for reasons unknown to me, switched to the latter the next year. Issues like this were a driving force behind the ACHA's founding in 1991 and subsequent recognition of NIT champions, which allows us to lay claim to the 1984 and 1990 national championships.

Penn State's University Libraries maintains Daily Collegian archives from 1887-1987 that are viewable online. I didn't even know about it until today - get ready for more posts where I dig up old stuff like this, especially over the summer. Here's the post-championship article from the March 14, 1984 issue.


So there you have it. Two tournaments, two deserving national champions...although in the March 2, 1984 Collegian, Rich Bradley, in previewing the NIT, seems to be completely oblivious to the whole two-tournament thing.


The Lions finished second in the championships last year, but none of the teams in that competition are scheduled to be in Tucson.

Sounds to me like the only tournament that counts is the one we're in!
Posted by Kyle Rossi at 11:03 AM