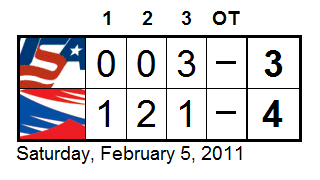 
I know I essentially said the same thing after the quarterfinal loss to Belarus, but I really hope everyone looks beyond the defeat to the big picture of how the World University Games program, the ACHA and hockey in the US in general are trending. The future is bright - we went from bottom feeders to solidly in the second tier in the first decade. The next decade will see us take still another step. Here are the details:

ERZURUM, Turkey – Team USA scored three goals in the third period to pull within one, but the U.S. Men's National University Team dropped a 4-3 decision to Slovakia here today in its final game of the 2011 Winter World University Games. Team USA captured sixth place and finished the tournament with a 3-0-0-3 (W-OTW-OTL-L) record.

Team USA fell behind less than three minutes into the game. Devin Sheehan (Binghamton, N.Y./University of Rhode Island) was then assessed a penalty shot at the 6:05 mark, but failed to convert.

After Slovakia built up a 3-0 lead in the middle frame, the U.S. responded with two power-play goals in the third period. Alan Dionne (North Scituate, R.I./University of Rhode Island) scored at the 8:55 mark and Tim O'Brien (Bethel Park, Pa./Penn State University) notched another power-play tally just 2:05 later to cut the deficit to 3-2.

Slovakia extended its lead to 4-2 only 27 seconds later. Dan Lassik (Garnet Valley, Pa./University of Rhode Island) then scored with 18 seconds remaining in regulation to bring the U.S. within one goal, but Slovakia held on for the victory.

O'Brien's goal, his third in as many games, came on the power play and gave Team USA a brief (and I mean brief - Slovakia answered 27 seconds later) glimpse at the end of the comeback tunnel at 3-2 with exactly 9:00 remaining. Michael Macari and James Telfer had the two assists. Speaking of assists, O'Brien got one of those as well, on Lassik's goal with 18 seconds left that unfortunately served mostly as window dressing. Other than that, he found himself on ice for three other goals, five of the seven scored in the game in total. The exceptions were Slovakia's first goal 2:47 into the game and the aforementioned goal 27 seconds after his, which works out to an even plus-minus. He fired two pucks on net and was 0-for-4 on his draws. O'Brien finished the tournament tied for second on Team USA with three goals (with Macari) behind only Dionne's four. The total was also good enough to tie for 23rd overall in the tournament with the gold and bronze medal games still to come.

Eric Steinour finished the game with a +1 rating by being on for that late Lassik goal while taking three shots and winning one of his two faceoffs. Unfortunately, he ended the tournament pointless, although it seems that, in looking at the available information, the coaches saw value in him logging good ice time right up until the end.

In semifinal action, Belarus goalie Vitali Bialinski - the guy who came in and shut the door on Team USA after Tim O'Brien's goal in the quarterfinals - stopped 29 of 30 as the Belarussians advanced to the gold medal game with a 3-1 win over Kazakhstan. Pavel Razvadouski had a goal and an assist to support the winning effort...Belarus will take on their former countrymen, Russia, for the gold. Anton Lazarev's goal 1:29 into the third period proved to be the difference as the Russians took down Canada 4-2. Brandon MacLean had a goal and a helper for Team Canada.

The Czech Republic used a pair of second period goals from Pavel Kriz and Martin Spok to erase a 2-1 deficit and rally past Japan 3-2 to take 7th place. 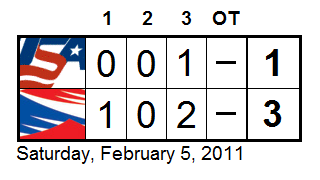 At the risk of sounding repetitive (again), the women's team is also deserving of our utmost respect and congratulations. Tying it back to what I said about the men's team above, the women are miles ahead of where the men were in 2001, and it will also be exciting to watch this side of things grow in the coming years. So despite unfortunately not coming away with the bronze, job well done. Recap:

The 2011 Winter World University Games marked the first time the U.S. sent a women's team after women's ice hockey was added to the tournament in 2009. The U.S. Women's National University Team's fourth-place finish is the highest a U.S. team has placed at the tournament.

"It was a great game today," said Mo Stroemel, head coach of the U.S. Women's National University Team. "We've made history and hopefully paved the way for many future women's teams that will play in this tournament."

Slovakia took a 1-0 lead 9:09 into the game with the first period's lone tally. The U.S. proceeded to have two breakaway opportunities, but could not find the back of the net.

After a scoreless second period, Slovakia scored just 41 seconds into the final frame and then notched a power-play tally at the 11:45 mark.

Down 3-0 heading into the final two minutes of regulation, Crawford gave the U.S. life when she scored on the power play. After Slovakia was called for tripping at 18:16, Emily Nelson (Harper Woods, Mich./University of Michigan) and Megan Winters (Basking Ridge, N.J./Northeastern University) set up Crawford, who sent a shot on net that beat Slovakian goaltender Zuzana Tomcikova with 1:28 remaining in the period.

Thirty-nine seconds later, the U.S. sent an extra skater to the ice, but could not edge closer as Slovakia held on for the 3-1 victory.


Vaughan finished a strong tournament by stopping 18 of 21 in defeat - none of the three goals appear soft on paper, they all came from that prime territory between the circles and down low. Her cumulative 1.81 goals against average was the best in the tournament outside of the goalies from dominant teams Finland and Canada...Reihl was a -1 (on for the 2-0 goal 41 seconds into the third) and took one shot. Her three assists for the tournament were good enough to land her 19th on the list of highest-scoring defenders, behind teammates Megan Winters, Crawford and Christina Young and her six penalty minutes tied her for 13th overall...Denise Rohlik didn't show up on the stats for the second straight game, but also had a good tournament, as you can see below.

Canada cruised to the gold medal in surprisingly easy (considering their tilt in group play) fashion, 4-1 over Finland. Finland, of course, takes home silver. Goalie Liz Knox made 20 saves on 21 shots, and Jessica Zerafa's goal 4:01 into the second period held up as the game winner. The Canadians rode roughshod over the competition all the way through, allowing only three goals and 63 shots over the entire tournament. Incidentally, Charlotte Hoium's goal (from Lindsay Reihl) in the semifinals was the only one of the three not scored by Finland and their five Olympic medalists.

In the 5th place game, Great Britain blew out Turkey 10-0. Sophie Herbert scored three of the ten, while Holly Cornford and Jennifer Bolton each added two.