Tomorrow is Another Day


Senior weekend is here, adding some meaning to a pair of fairly meaningless games against Rutgers, specifically, the Ice Pavilion curtain calls for seniors Carey Bell, Taylor Cera, Teddy Hume, John Jay, Tim O'Brien, Marek Polidor and Chris Pronchik. This group of men has been a tremendous asset to the program, something that will undoubtedly continue to be the case as they make their way in this crazy world.

For one of them though, there's significance even beyond that to these games.


O’Brien, who has led the Icers in scoring the past three seasons, is just two points shy of hitting 200 for his illustrious career donning the white and blue sweater. The forward has been the catalyst to the Icers’ offensive attack this season, and has posted 22 goals alongside 18 assists, despite missing six games in January to represent Team USA in Turkey at the World University Games.

Not too shabby. I could go on and on about these guys, from Hume's status as one of the all-time great Icers goalies to Cera's grit to Pronchik's relentless penalty killing, but for me, the real Senior Day takes place March 9th in Newark, DE when we hoist the Murdoch Cup (right?). I'll save the teary farewells for then.

There is another team in these games too, believe it or not.

Way back when I thought Penn State would be stuck in the ACHA forever (August, 2010), Rutgers was the type of team I would always root for. Big school with a recognizable name, seems on the surface like they're fairly committed to their program, generally an asset to the ACHA in terms of both quality and credibility. Basically in the same vein as Penn State, Illinois, Arizona (back when they mattered), Arizona State, Iowa State, Delaware, Oklahoma and Rhode Island, except not quite as far along on the growth chart. Well, okay, maybe not Rhode Island unless you're a Lamar Odom fan, but they're a state flagship in New England, which has to count for something.

I abandoned my Plan for ACHA World Domination sometime around September 17, 2010 (I really need a nickname for that day) but still, it's nice to see that we're going to leave the thing in good hands. For all of its flaws, it's been a huge part of our program, and I'll probably always keep an eye on it.

Okay, enough of that, I'll save that post for next March.

The Scarlet Knights have certainly come a long way from the team the Icers last saw in January, 2000:


On Friday night, the Icers won their NLIT title-game berth with a dominating 12-5 victory against an overmatched No. 20 Rutgers team.

Penn State had the game well in hand from the outset, as goals by [Neal] Price, Todd Dakan, Mike Blevins, Greg Held and Paul Sealock staked the Icers out to a 5-0 late in the second. Rutgers answered on the power play before the intermission.

The third period brought an amazing outburst of scoring, 11 goals in all. Seven of those ended up in the Rutgers net, with McArdle, Sealock, Held, Dakan, Price, Brandon Cook and Alon Eizenman all finding twine for the Icers.

"The pucks just were going our way," Held said. "I think my line and the whole team played pretty well."

The only saving grace for Rutgers was the performance of goaltender Joe Azzarello. The senior managed to make 74 saves before being replaced in the third period. All in all, Penn State rifled 84 shots at Rutgers goaltenders.

"Goaltending has been one of our bright spots this season," Rutgers ice hockey coach Mike DeAngelis said. "But Penn State's just one of the best hockey programs in the country."

Current coach Andy Gojdycz came to the rescue in 2006-2007, and the results have been nothing short of drastic. The program's first winning record in ten years in 2007-2008. A successful move from the ECHA to the new NECHL (where Gojdycz serves as commissioner), including regular season championships in 2008, 2009 (co-championship) and 2010. And once the NECHL autobid kicked in, Rutgers made its first-ever ACHA national championship tournament (in Division 1) last season, and hung in with Lindenwood a lot better than many teams do (8-3) before losing an OT heartbreaker to Canton for 15th place.

This season? More of the same. Actually, better than that - their 19-7-0 mark is their best winning percentage since moving to D1 in 1998-1999, and they tore through the NECHL with a 13-1-0 conference mark to earn a second consecutive ACHA autobid - they face No. 2 Davenport in the first round on March 5th - before falling to Syracuse in the conference tournament's championship game.


So in one sense, it's been a pretty successful season for the State University of New Jersey. In another, it's been a trying season, due to the passing of former captain Josh Esformes back in December. 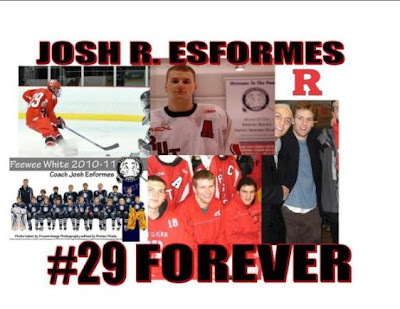 My belated condolences go out to the Rutgers hockey community on their loss. Esformes sounds like a first-class guy from what I've read.
On the ice, the Scarlet Knights plowed through the adversity, thanks in large part to a forward group that runs two lines deep with big numbers. Super soph Jason Adams (20 goals, 45 assists) leads the way, followed closely by Matt Ruthberg (23, 29), Matthew McDonald (21, 26), Timmy Nakajima (11, 34) and Gil Schaffer (18, 25). The fist-pumping back end includes starting goalie Brandon DeLibero (3.54 GAA, 0.901 SV%) and defensemen Doug San Giacomo, TJ Fiorillo and Joe Ippolito, although non-Italians Will Bolinder and Jackson Udelsman do their part on the blue line too.
You might not expect it, but RU actually has a decent-sized track record playing PSU opponents. They opened the season with 8-3 and 8-5 losses at ESCHL champ Rhode Island, who of course, we'll be seeing next weekend. They've also played Niagara (6-5 win on October 2nd), West Chester (8-3 win on October 22nd) and Drexel (4-3 loss on January 21st). Those eight goals against URI, especially when held against the nine the Icers had in four games with the Rams, tell me they can score against anyone. Almost like a Robert Morris with a little more balance and a little more defense.

In other words, they're the perfect opponent for a weekend like this - they'll force us to be engaged, but without the pressure that comes from having anything at all on the line.
Outside Reading
VFTB's Steve Penstone dominates this space this week, as he did some fantastic work from up in Buffalo, site of the Pegula Day festivities.

It's a Great Day for Hockey - Part II - Contains video from the Pegula introductory press conference on Tuesday, as well as Steve's allotted one minute with NHL commissioner Gary Bettman - much credit is due his way for asking the "right" two questions with zero margin for error. Plus there's a picture of Rick Jeanneret, who is as clutch as they come. MAY DAY!

Miller Time - An interview with Ryan Miller that fortunately went a little better than this one. Who will be the first Penn Stater/Olympic hockey hero?

The New Era Begins in Buffalo - A dispatch from the Sabres-Thrashers game Wednesday night, complete with the pictures to prove it happened. Like this one.


Elsewhere, the official site informs us of something I did not know - PSU and Rutgers have a series history other than that 2000 game. And the Collegian fills us in on something else that may have slipped under the radar, given the events of last weekend: the ESCHL awards won by O'Brien, Matt Madrazo and George Saad.
Posted by Kyle Rossi at 11:22 PM