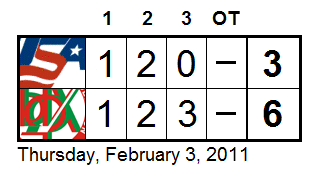 Heartbreaking? Absolutely. But amidst the disappointment, let's not forget how far the USA Hockey WUG program, and by extension the ACHA, has progressed even from two years ago, when beating Slovakia was a massive achievement. Or back slightly further, when even winning a single game was cause for celebration. Even though Penn State won't be part of this event next time around, I can't help but think we're leaving it in good hands.

In the meantime, Team USA still has a great shot at fifth place and a final record of 4-2-0, both of which would be bests since 2001. It starts with Japan tomorrow at 8:00 a.m. in the 5th-8th placement playoffs.

﻿ERZURUM, Turkey – The U.S. Men's National University Team erased a two goal deficit midway through the second period, but eventually fell to Belarus, 6-3, in the quarterfinals of the 2011 Winter World University Games. The U.S. will face Japan tomorrow (Feb. 4) at 8 a.m. EST in the classification round.

"I'm very proud of every player on the team," said Dave Debol, head coach of the U.S. Men's National University Team. "I loved the effort, especially when we were down, 3-1. We never quit and came back to tie the game, but we just fell a little short today."

Belarus took a 3-1 second period lead, but the U.S. responded with two goals 1:19 apart to tie the game. Alan Dionne (North Scituate, R.I./ University of Rhode Island) scored at the 10:17 mark and Tim O'Brien (Bethel Park, Pa./ Penn State University) followed with a power-play goal to even the score heading into the final frame.

Belarus gained the 4-3 edge just 53 seconds into the third period and added two late goals to secure the 6-3 victory.

Team USA goaltender Dan Pyne (Warrington, Pa./ Drexel University) made 27 saves in the loss, while Goryachevskikh and Vitali Bialinksi combined to stop 22 shots in the win.

Here are highlights from all of the quarterfinal matchups from FISU - O'Brien's goal is included.

As mentioned a couple of times, Tim O'Brien scored a pretty important goal that brought Team USA back to even at three in the second period - and earned Belarus starting goalie Goryachevskikh the hook. You can see it starting at 1:10 in the video just above - pretty goal. Outside of his power play marker, O'Brien was on for the mid-second period Belarus goal that put the US down 3-1, the third period 5-on-3 Belarus goal that proved to be the game winner and the empty netter that made the score 5-3 late. All of that adds up to a -2. He had four shots and a 1-1 faceoff record... Eric Steinour got into some kind of altercation with Belarussian defenseman Mikhail Kharamanda at 12:22 of the second period. Steinour got a roughing penalty, but Kharamanda got two of them, so well done Big Stein. He rated a -1 by being on ice for the early second period goal that briefly made the score 2-1 Belarus, had two shots on goal and was 1-1 on draws.

Kazakhstan turned in a dominant effort against Japan, winning 5-1 in a game that got pretty brutal in the closing minutes (eight roughing minors handed out at the 17:58 mark of the third). Alexandr Lipin's power play goal with 19 seconds left in the second period held up as the winner...Canada earned the second semifinal slot with an also-decisive 9-1 result against Slovakia. It was once again Brandon MacLean leading the way for the neighbors to the north with a five-point effort, including two goals on the advantage...top-seeded Russia withstood a strong early challenge from the Czech Repubic and pulled away over the second half of the game to win 6-1. Also, I retract my "pretty brutal" description of KAZ-JPN above, as this one put that one to shame with 314 total penalty minutes - 272 in the last 16 minutes of the game.

These results, combined with Belarus' win over Team USA, give us semifinal pairings of Belarus-Kazakhstan and Russia-Canada.

In the 9th-12th place playoffs, Slovenia blitzed Turkey 11-1 behind pairs from Jure Miljus, Nik Lahajnar and Grega Pihler. Turkish captain Emre Elevli scored his country's first goal of the tournament (men's or women's) at 14:46 of the first period...Juan Munoz Crego scored the only goal of the shootout as Spain upended South Korea 5-4. Munoz Crego also assisted on Spain's first three goals, which does not include Alejandro Pedraz Martin's power play goal with 2:39 left to force overtime...Slovenia will now play Spain for 9th place tomorrow, while Turkey and South Korea battle for 11th.

The women's field enjoyed their final off day of the tournament ahead of tomorrow's semifinals and Saturday's gold, bronze and fifth-place games. Team USA had a practice ice time scheduled 2:00-2:45 a.m.