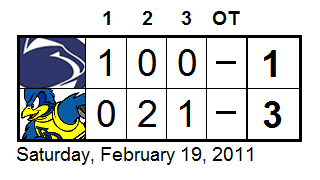 Collegian summary // Collegian recap // Onward State recap // Black Shoe Diaries recap
VFTB highlights // PSU press release // UD press release // Box score
Well, that sucked.
I don't know of a nice way to describe what happened Saturday afternoon, so I'll just get straight to the point: the Icers were outworked, out-talented, out-coached and pretty much out-everythinged today by Delaware. We didn't look like a team that was the least bit interested in building on some of the successes of this semester, and unless something changes drastically in the next two weeks, the trip to nationals is going to be just as quick as the one to the ESCHL playoffs. As it stands, I'm not the least bit worried about missing a Penn State game as a result of my having to come home from Delaware on Travel Monday to take a midterm.

It wasn't always this ugly. Just 4:02 into the game, Dan Loucks took out Connor Moore behind the Penn State net. Marek Polidor then collected the loose puck and fired possibly the only stretch pass all afternoon that worked from his own goalline. After deflecting off the Delaware defense at center, it found a somehow-onside Chris Cerutti behind everyone, and Cerutti finished like he's been known to do from time to time. Good to have you back, Chris.

This concludes your summary of the Icers' offensive effort Saturday. Following the goal, the game looked a lot like the beginning of the Robert Morris-West Chester first-round game where the dominant team, inexplicably, was trailing. That fun only lasted until 7:41 of the second period, when a Zack Reubel dump-in took a strange bounce and was misplayed by Matt Madrazo. Thus ended the Icers only chance of winning the game, which more or less amounted to hoping Madrazo - who was outstanding otherwise - somehow made that paper-thin lead hold up.

That's not to say there weren't chances, although they were few and far between. On one such chance with 2:25 left in the second, Kurt Collins and Chris Pronchik used a blue line turnover to start a 2-on-1. Reubel hustled back from the opposite side and a combination of his nice play and some of the opposite from the Penn Staters foiled that effort. Just 25 seconds later, a deflected David Conte shot found the stick of Kevin Miller (the Delaware one), and Miller beat Madrazo with what would prove to be the game winner.

The Icers' last best chance to tie it up came with 8:55 left when Tim O'Brien took a pass just to the side of the net and attempted to stuff it in. O'Brien and several teammates thought he had scored, but it was immediately ruled that the puck had not crossed the line before coming to rest underneath Blue Hens goalie SJ Broadt. A power play with 1:44 left, combined with Madrazo being pulled, added some late drama, but ultimately it only led to an empty netter to supply the final margin.

So what's wrong with the Icers? In the chat room that's part of the UStream broadcasts, a couple of long-time fans hit on a couple problems today that I probably haven't examined here enough.


5:21 icersfan: sad that they don't seem to be communicating on the ice, this is what happens
5:22 icersfan: and if they play like this at natty's it will be one and done
5:23 sox88: you're right fan i attribute it to coaching though, you mix up pairings if somethings not working or change a d system that and where's the captain's putting fire into the players
5:24 icersfan: I agree soxs, but this has been a season long issue, it should have been fixed by now
5:25 edhume3: They lost some good coaching when Bill Downey left.
5:25 icersfan: mind you it is getting worse, ya gotta wonder if the NCAA move has something to do with it
5:25 icersfan: I hate to see them go out like this
5:27 icersfan: ed your right the loss of Downey was not good
5:27 sox88: agreed on both accounts, plus i seem to recall we had alot more asst vol coaches around too, i certainly miss Doc and Darren's help
5:30 sox88: and btw if it is a season long problem which it is makes it even more a coaching issure
5:30 sox88: issue sorry
5:31 icersfan: I think it has been a season long issue sox
5:32 sox88: agreed
5:33 icersfan: not sure what happened with coaching this year, not as good as in the past
5:35 sox88: you brought up the whole DI thing as a distraction and that could be the case to an extent with everyone wondering whats going to happen to the team
5:37 icersfan: True, maybe I am more correct than I thought

The volunteer assistant thing is something that had never even crossed my mind before, but it strikes me as a valid point - the numbers and quality probably aren't where they have been in the past. Probably more a testament to Joe Battista's magnetism than anything else. I like what I've seen from Josh Hand, so I'm not ready to say that Downey's departure caused all of this inconsistency. The NCAA transition has undoubtedly given us a giant bullseye and probably has created some tension with the underclassmen.

It's probably not a simple answer, and that answer may include all or none of those things. As of right now though, it looks like we'll have a nice, long offseason to figure it out.

Are there any positives? Well Madrazo, as mentioned. Although I once doubted it, I think he can be an equalizer at nationals against teams that, quite frankly, are better than us. The fact that this game wasn't 5-1 or 6-1 is entirely attributable to him. Also, both Cerutti and Taylor Cera returned from injuries - let's hope that some of the awfulness was due to the slightly reshuffled lines that resulted, which of course is something that can be fixed over the next couple weeks. Until we know one way or another, I foresee a whole bunch of taking anything good that happens against Rutgers next weekend and guessing whether it would've happened against Rhode Island.

Speaking of, there was another ESCHL semifinal played Saturday... 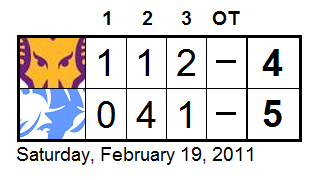 Rhode Island's explosive second period that featured goals from four different players over a span of 10:02 helped the Rams survive a late West Chester rally and win 5-4. With the victory, Rhody advances to face Delaware for the ESCHL playoff championship at 1:00 p.m. Sunday.

Those four goals, from Kyle Krannich, Jaryd Coleman, David Macalino and Justin Krute came after West Chester took a surprising 1-0 lead into the first intermission despite being outshot 16-6. And they, together with a Robert Beggi tally early in the third, were enough to counter three Golden Rams ginos in the last 20:07 of the game.
Posted by Kyle Rossi at 12:56 AM