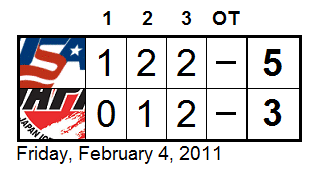 I guess taking a ton of penalties isn't quite as bad when you score almost as many shorthanded as the other team does on the power play. It wasn't easy, or pretty, but the win guarantees Team USA its highest WUG finish since the ACHA helped revive the American presence at the event in 2001. The US earned a bronze medal at the 1972 WUG using players from...I don't know, somewhere else. The NCAA, presumably. Here's the write-up:﻿﻿﻿ ﻿

"This is a huge win for us, especially since Japan has beaten us at the last two tournaments," said Dave Debol, head coach of the U.S. Men's National University Team. "We've accomplished our goal of placing higher than we ever have before at this tournament and earning fifth place would be a great honor."

Team USA opened the scoring 6:39 into the first period, when Lepre notched a shorthanded tally. Augie Hoffmann (Lake Forest, Ill./University of Oklahoma) sent a feed to Lepre, who skated up ice on a breakaway and fired a shot from the top of the faceoff circle that beat Japanese goaltender Yuta Narisawa.

Japan tied the game at the 10:45 mark of the second period, but the U.S. gained a 2-1 edge less than five minutes later with a goal by Alan Dionne (North Scituate, R.I./University of Rhode Island).

Tim O'Brien (Bethel Park, Pa./Penn State University) then scored with just :38 remaining in the middle frame to give Team USA a two-goal cushion heading into the third period.

The U.S. took a 4-1 lead 4:38 into the third period when Sheehan scored Team USA's second shorthanded goal of the game. Japan scored twice to cut the U.S. lead to 4-3, but Kevin Kranker (Lake Orion, Mich./Oakland University) notched a power-play goal to secure the 5-3 victory.

For the second straight game, O'Brien scored an important goal on a day where they were all pretty important. It came on a 2-on-1 with Grant Gorczyca at the 19:22 mark of the second period. In a rare act of Penn State-Ohio cooperation, Tyler Pilmore had the second assist. O'Brien was also on for Ryo Murakami's third-period goal that trimmed the US lead to 4-2, so he comes out even on the plus-minus ledger. He added two shots other than the goal and was 1-2 on faceoffs...Eric Steinour was on ice for Kranker's power play goal with 6:41 left that restored sanity after Japan had trimmed a 4-1 lead to 4-3. He had one third-period shot and a 1-1 faceoff record.

In the 11th place game, Turkey managed to score for the second straight game, but it wasn't enough to match Sang Youp Lee's two first period goals as South Korea defeated Turkey 4-1...in a surprising result to anyone who's been playing close attention, Spanish goaltender Ander Alcaine Val was beaten seven times in just over 50 minutes as Slovenia cruised past Spain 8-0 in the 9th place game behind eight different goal scorers.


Ondrej Zosiak's power play goal goal with 6:18 left completed Slovakia's comeback from an early 2-0 hole and boosted them past the Czech Republic 3-2. The Slovaks were outshot 36-18, however goalie Peter Pus stopped 34 Czech attempts, including all 16 he faced in the third period. Slovakia moves on to face Team USA for 5th place, while the Czech Republic battles Japan for 7th. 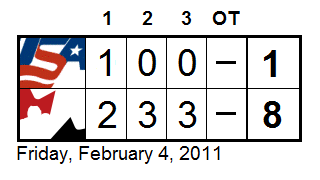 No point in wasting time - straight to the recap we go:

ERZURUM, Turkey – The U.S. Women's National University Team fell to Canada, 8-1, here today at the 2011 Winter World University Games. The U.S., which is competing in the women's tournament for the first time, will play in the bronze-medal game against Slovakia tomorrow (Feb. 5) at 2:30 a.m. EST.

After Canada took a 2-0 lead at the 12:46 mark of the first period, the U.S. responded with a goal to cut its deficit in half. Team USA led a rush into the offensive zone and Lindsay Reihl (Cheshire, Conn./Penn State University) fed the puck to Charlotte Hoium (Falcon Heights, Minn./Michigan State University), who sent a shot past Canadian goaltender Liz Knox.

Canada scored just :55 into the middle frame and notched two more goals to take a 5-1 lead into the third period.

Hate to tell you, but there's also video - second half of this:

Rossi started and finished the game in goal. She faced a tremendously adverse situation, with Canada outshooting the US by a staggering 56-7 count, but came out of it standing - despite the eight goals against, she actually improved her save percentage for the tournament. Rossi also took a charging penalty (successfully killed) in the third period. I'd love to see how that happened...Reihl assisted on Hoium's late first period goal that kept Team USA in the game, at least at the first intermission. However, she was also on ice for five Canadian goals (one on the power play) resulting in a -3 for the game. Reihl's three total points currently place her 16th in scoring by defenders at the tournament...neither Reihl nor Denise Rohlik recorded a shot on goal.

In the other semifinal matchup, Finland overpowered Slovakia 5-1 with a 42-11 shot differential. Venla Hovi scored the game-winning goal and assisted on three others to support the winning cause. The Finns are now assured of at least the silver medal and will take on Canada for the gold tomorrow at 6:00 a.m.