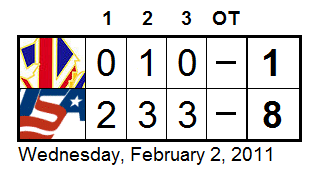 Team USA locked down the final semifinal bid in the women's tournament by whipping Great Britain 8-1. Lots of goals to talk about, so let's hit the recap.

ERZURUM, Turkey – Ramey Weaver (Eagle River, Alaska/ Robert Morris University Illinois) scored the game-winning goal and collected an assist, as the U.S. Women's National University Team earned an 8-1 win over Great Britain here today at the 2011 Winter World University Games. With the victory, the U.S. improved to 2-0-0-3 (W-OTW-OTL-L) and advanced to the semifinal round on Friday (Feb. 4).

"It looked like we had more jump in our step today, so we're back on track and feeling great," said Mo Stroemel, head coach of the 2011 U.S. Women's National University Team. "We'll relish this for a little while and then get ready for the next game."

Team USA opened the scoring just 46 seconds into the first period while on the power play. Weaver passed the puck to Megan Winters (Basking Ridge, N.J./ Northeastern University), who fired a slap shot from the high slot that beat Great Britain goalie Laura Saunders for the early lead.

Katie Vaughan (South Park, Pa./ Penn State University) made 11 saves in the win for the U.S., while Saunders stopped 43 shots in the loss for Great Britain.

Both Lindsay Reihl and Denise Rohlik contributed to the win with a primary assist. Rohlik's was first, on Payne's late second-period even strength marker that made the score 5-1. Reihl's came on the next US goal, a power play tally by Hoium...both players earned a +1 rating for the game, as Reihl was also on ice for Jensen's goal with 5:55 left that capped the scoring...Rohlik registered two shots on goal, Reihl one...Reihl started and was once again paired with Lindenwood's Crawford...Vaughan was the starting goalie today and continued her strong tournament with stops on 11 of 12 shots. You can see her overall stat line just below - it's good.


Finland earned the No. 2 seed going into the semifinals by pounding Slovakia 7-0 behind Saara Tuominen's five points (2 goals, 3 assists) and an 11-save shutout from Anna Vanhatalo...Candice Styles scored three times, while Ellie Seedhouse and Breanne George each added two as the Canadians clinched the No. 1 seed with an 11-0 win over Turkey. Turkey has yet to score a goal in the tournament on either the women's or men's side of things.

For the first (and only) time all tournament, there were no men's games today as the teams prepare for the quarterfinals tomorrow.