Marek Polidor is an Alumnus...

...so why wouldn't he be featured in the alumni magazine, The Penn Stater? I caught this in the March/April, 2011 issue, which just hit my mailbox today. Here's the text of the write-up, since it's pretty hard to read from the scan (which is at the bottom of the post).

A hockey captain, born too soon for Penn State's jump to the big time.

Marek Polidor could have played Division I college hockey, but he came to Penn State instead. Were he a few years younger, he knows, he wouldn't have had to choose.

A senior forward and captain of the Penn State Icers, Polidor '10 Sci was good enough in high school to earn a D-I offer from the Air Force Academy. The western Pennsylvania native chose to stay closer to home. "I came to Penn State for the academics," he says. "Hockey was a bonus."

It was supposed to be, anyway: As a freshman, Polidor tried out for the Icers, one of the nation's best club programs - and got cut. "I'm still not sure how that happened," he says. Resigned, he played intramurals instead. But former Icers assistant coach Matt Bertani encouraged him to try out again, and Polidor made the team as a sophomore; he had a goal and an assist in an early season cameo against Navy, then cracked the regular rotation a month later and never left.

The reward for Polidor's perseverance came last fall, when he was named team captain. But another Penn State hockey announcement around that time got a bit more attention. "It's long overdue," Polidor says of the Nittany Lions' planned move to varsity status in 2012. "It's a great opportunity for the younger guys on the Icers, who will have a shot to play D-I. That's a goal every one of us had."

Polidor will miss that chance, but he'll hold onto his skates. He says Penn State's soon-to-be-built hockey arena "sounds incredible," and when the Icers move their annual alumni game to the new rink, it's unlikely anyone will be able to keep him off the ice. 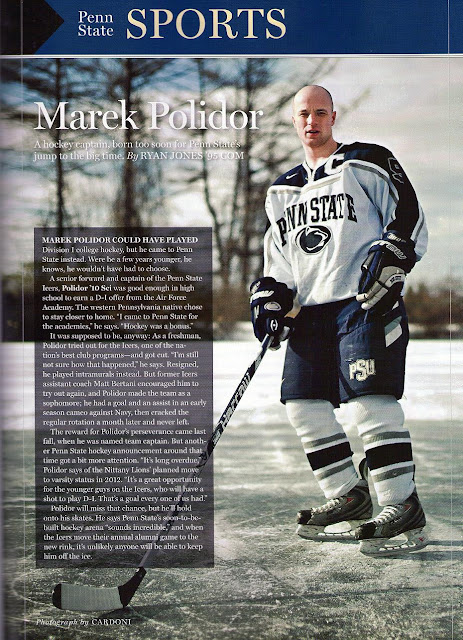