Breakout Past: The 'Club Sport Pacemaker'

The following article was taken from the November/December 1981 issue of The Penn Stater, PSU's alumni magazine.

The Icers - who went on to finish 24-8-0 - did a lot of growing up in the 1981-1982 season covered by the article. It was their first full season in the Ice Pavilion, following its January, 1981 opening. For the first time, PSU competed in a club hockey national championship tournament, finishing 3rd (2012-2013 opponent Alabama-Huntsville won that first-ever national championship). They also brought on Jon Shellington as coach. Shellington stayed until the end of the 1986-1987 season and left as PSU's most successful and longest-serving coach. Those distinctions, of course, were ripped away by successor Joe Battista, a senior defenseman on the 1981-1982 team. 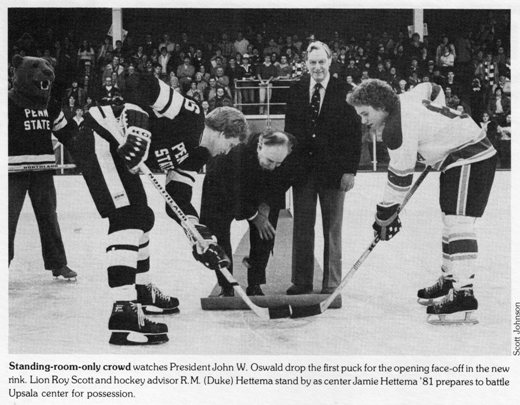 Take twenty athletes, charge them $150 to join the team, then make them pay another $100 to $300 for uniforms, equipment, transportation, lodging, meals and insurance, find them a coach who'll work for nothing, and you've got the makings of a champion.

Do not doubt it for one minute. Penn State's ice hockey team has proved time and again that success can be cultured from just such a formula.

And chances are, if you happened to ask them, they wouldn't have it any other way. What with varsity-team funding in jeopardy in these days of universal cutbacks, and varsity teams not permitted to go out and raise their own money, the hockey team is in good shape at the top of the heap among Penn State's club sports.

Top of the heap doesn't necessarily mean that hockey is better than any of the other 48 club sports, but it does have the most members (300 at last count) and it does raise thousands of dollars to pay 60 percent of its own way through every season; the other 40 percent comes, not from Athletic Department or College of Health and Physical Education budgets, but from Associated Student Activities which lends a helping dollar to student programs throughout the University.

With the money it raises, this mammoth club fields a 20-member varsity team which plays a 33-game schedule this year against such powerhouses as Kent State, Villanova, Canisius, Eastern Michigan, Upsala and Duke; a 20-member junior varsity squad with a 14-game schedule against teams throughout Pennsylvania; and a 180-member intramural division which functions independently from the College of HPER. Moreover, the varsity squad will compete in four invitational tournaments - at Navy, Eastern Michigan, Kent State and Colorado University - and the club will sponsor its own Nittany Lion Invitational in February.

It has taken Penn State hockey a decade to reach this level. Since its beginnings in 1970-71 the varsity team has compiled a 130-65-9 record, with four regular-season first-place finishes in the Mid-Atlantic College Hockey Conference (MACHC), back-to-back MACHC championships in 1978-79 and 1979-80, and a bunch of first- and second-team League All-Stars. Among this year's most promising returning lettermen are MVP Glenn DeStefano and Matt Glass, both juniors and tied for the club season scoring record at 34 each. Last season the team left the MACHC, a league it had outgrown, to expand its schedule and meet the challenges of a higher level of competition. Today 90 percent of its opponents are NCAA varsity-caliber teams.

Dedication may be the most overworked and underdeserved cliche in athletic jargon today. When applied to Penn State hockey it is neither; it is truth. After digging into the piggy bank just to play, who else would travel a hundred miles for tryouts, practices and "home" games? That was during the two seasons it took to complete Penn State's new Indoor Sports Complex, when Mechanicsburg, not University Park, was "home" for games on ice.

But last January when the new rink opened at the Indoor Sports Complex, a capacity (1,100) Nittany Lion crowd was on hand for its christening with a hockey victory over Upsala. That was one of five standing-room-only home games in a season that ended 24-6 with only one home loss (Philadelphia Junior Flyers). Crowd estimators say 12,000 fans watched the Lions last year with an average game attendance of 800. The increased level of competition, along with the team's growing reputation for strong and fundamentally sound hockey, is expected to ensure sellout crowds again this year.

And it will be another season of Penn State-style good, clean, hard hockey under new coach John Shellington, whose introductory greeting was, "I do not tolerate penalties." Shellington, former letterman at Clarkson College, a Division I hockey power, is a CPA in State College who agreed to coach the team for no more than a possibility of club budget leftovers (if there are any) at the end of the season. He was recruited by the club to succeed Clayton John, another unpaid volunteer from the ranks of downtown businessmen, who has moved to Phoenix, Arizona.

The season opener was scheduled for October 23 against the Philadelphia Junior Flyers all-stars to be followed by almost-weekly contests until mid-March. And the team is looking for blue and white fans both at home and away, so the schedule, from December on, follows:

THE AUTHOR: Dale Krach is a West Virginia University psychology graduate who earned his master's degree in environmental sciences at Penn State and served on Alumni Council as president of the Graduate Student Association, 1979-80. He is now teaching and working toward his Ph.D. in health education. One of his favorite spare-time pursuits is serving as trainer and executive director of the Penn State Hockey Club, an unpaid volunteer job he's held for the past two years.
Posted by Kyle Rossi at 12:15 AM

Email ThisBlogThis!Share to TwitterShare to FacebookShare to Pinterest
Labels: Breakout Past, History, The Penn Stater