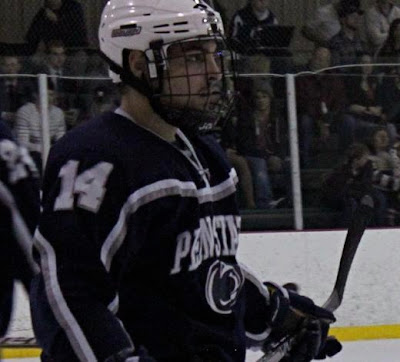 From the moment people said "hey wait, that's Ed Olczyk's kid" through his goal and assist in a 12-second span against Oklahoma at nationals under bizarre circumstances that clinched the final win in Icers history, Tommy Olczyk was a revelation. The ACHA had already recognized this in the form of their all-rookie team earlier this month, but they have now decided that Olczyk needed to be declared the best of those rookies.

The following is the ACHA release in its entirety, via pennstatehockey.com.

Olczyk made an immediate impact for Penn State. The freshman led all ACHA rookies in several statistical categories, including goals (24), assists (29), points (53) and game-winning markers (3), and his 24 tallies also ranked first on the team.

A tireless worker on the ice, the forward helped Penn State secure the No. 1 ranking in the nation for most of the year, as the Nittany Lions advanced to the ACHA National Tournament semifinals. Following the 2011-12 season, the team voted Olczyk its Rookie of the Year.

The ACHA All-Rookie Team member also made positive contributions in the classroom, as he earned a perfect 4.0 grade-point average during his freshman academic year.

Olczyk joined Penn State following four seasons with the Sioux City Musketeers of the United States Hockey League. In his final season with Sioux City, he earned the league's Curt Hammer Award, presented to a player who distinguishes himself both on and off the ice by demonstrating outstanding performance skills, pride and determination.
Posted by Kyle Rossi at 11:19 AM