The following article was taken from the September/October 1985 issue of The Penn Stater, PSU's alumni magazine and spotlights the "Ice Hockey Club" as it prepared for the 1985-1986 season. In its first go as a member of the brutally-tough ICHL, and behind 38 goals apiece from Lynn Sipe and Greg Powers, PSU finished 17-16-3 and in fourth place at the National Invitational Tournament under head coach Jon Shellington.

By the way, if the writer's last name sounds familiar, it's because he's the father of incoming women's recruit Jill Holdcroft. Jill's uncle Bob is also a former Icer. 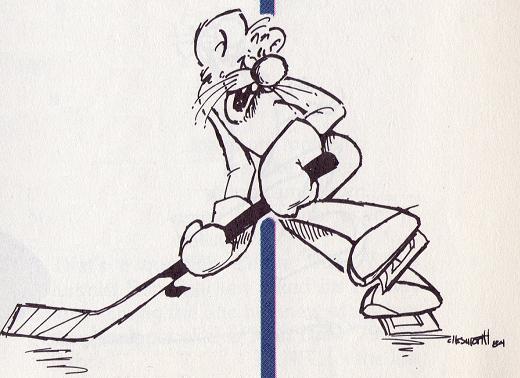 The term student-athletes generally conjures an image of athletes who attend classes in the morning, suit up for practice every afternoon, study at night, and have games on weekends. That's all true for members of the Penn State Ice Hockey Club with one major added responsibility - financial. They must run their own program, pay $250 per player to participate, and generate two-thirds of the budget required to operate the sport. That additional imperative brings a third dimension to the image, making the Penn State ice hockey player a student-athlete-businessman.

Thanks to the single-minded dedication of its members, the Ice Hockey Club has been growing both on and off the ice and recently has experienced a renewed enthusiasm among team members, club officers (some of whom do not play hockey), various corporate sponsors, local hockey enthusiasts, and alumni.

The students have been nurturing their relationships with each of these groups through some very creative and personal projects. Among recent highlights have been the spring and fall Mini-Hockey School, entirely organized and instructed by club members, and the launching of an Alumni Booster Club for the future development of the entire hockey program.

Richard Herr '47, Lancaster, heads the Boosters and reports that the Club already is receiving generous support from a number of alumni. One such booster is Ned Kocher '53 of Mansfield, Pennsylvania, who has arranged through his business, N.K. Enterprises, for the team to purchase equipment at greatly reduced prices.

"It's time," says Kocher, "that more alumni take notice of this professionally run student organization and step forward to offer their support. The students have brought recognition to the University through their own creativity and efforts. We can assist, not just financially but with professionalism and expertise on how they can better operate the club."

Currently, Kocher is working with club members to enhance their marketing efforts and invites other alumni and friends who are interested in offering their time and talents via the Booster Club to volunteer. The place to write is Ice Hockey Club, #10 Intramural Bldg., University Park, PA 16802.

As for professionalism, it has been demonstrated on the ice as well as in the business of running Penn State Ice Hockey. After coming off a tough first-semester start last year against such Division I powerhouses as Notre Dame, Michigan-Dearborn, Kent State and a strong Alabama club team, the Nittany Lions finished with an impressive 21-11-3 record. A seven-game winning streak opened the second semester and included a slashing of rival Cortland State, 10-3, and exciting 5-4 overtime victory over Ohio University for the PSU Invitational title, and a first-place finish in the Navy Crabpot Tournament. A respectable but disappointing second-place finish in the Club Team National Tournament at Northwestern closed the season.

Recapturing that national club title in Arizona is just one of the team's many goals for the coming year in which it will participate for the first time in the International Collegiate Hockey League (ICHL) and will play in six college tournaments. That's a schedule that promises to make each of their 40 games a must-win situation. The schedule, with league games denoted by asterisk:

THE AUTHOR: Tim Holdcroft '86 is a right winger on the hockey team as well as vice president of the Hockey Club. It's only fitting that he's also an outstanding student in the College of Business Administration.
Posted by Kyle Rossi at 12:35 AM

Email ThisBlogThis!Share to TwitterShare to FacebookShare to Pinterest
Labels: Breakout Past, History, The Penn Stater